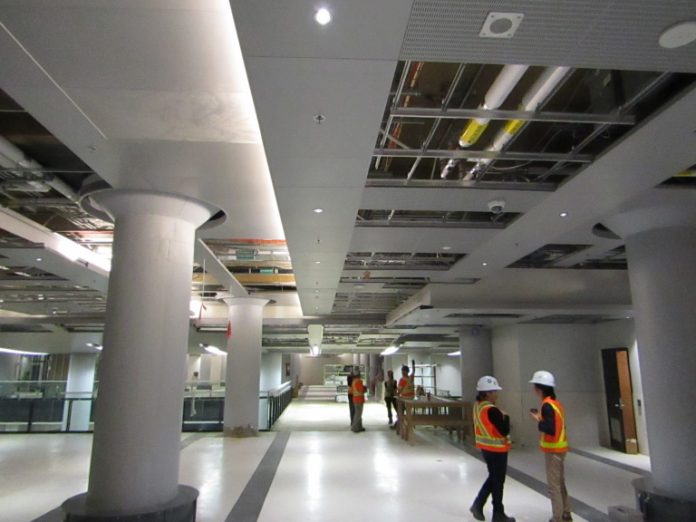 Construction walls are down and a new access route from Toronto’s Union Station opened Dec. 23 —  months after the opening of a glass-covered moat and underground tunnel running below Front Street.

According to Metrolinx officials, the additional access route provides improved access to the TTC and marks the beginning of the new Bay Concourse. It starts in the Lower Great Hall, next to Dresden Vision – the level right below the VIA Rail Canada ticket booths and exits in front of Union Station, on Front Street.

“The City of Toronto is excited to see this milestone arrive at Union Station,” said Brad Ross, the city’s chief communications officer. “Modernizing a historical facility like Union, while keeping it open to the public throughout, takes time and the commitment of many.”

Closed since the end of Toronto’s PanAm Games in 2015 for a total overhaul, the Bay Concourse is scheduled to reopen to customers in spring 2020.

Union Station has been under construction for over eight years – much longer than originally expected and the cost has also ballooned. Metrolinx officials now say the $823-million revitalization and expansion project with contractor Bondfield Construction Ltd., is on track to be completed by the end of September 2020.

The expansion included contractors digging out a new basement level below the entire station to increase the amount of retail and commercial space as well as build new passenger concourses — all while crews restored major heritage elements of the 92-year-old structure.

New projects to overhaul aging train platforms and expand the south side of Union will continue through the 2020s.

Infrastructure Ontario and GO Transit overseer Metrolinx issued a request for qualifications (RFQ) on Oct. 28 for the GO Expansion Union Station Enhancement Project. The deadline for online question submissions is Jan. 16 and the competition closes Jan. 30.

The work includes designing and building transit infrastructure and implementing upgrades to accommodate the planned expansion of GO rail service. The scope of work includes:

Getting ready for the new Ontario Construction Act: Be ready for...