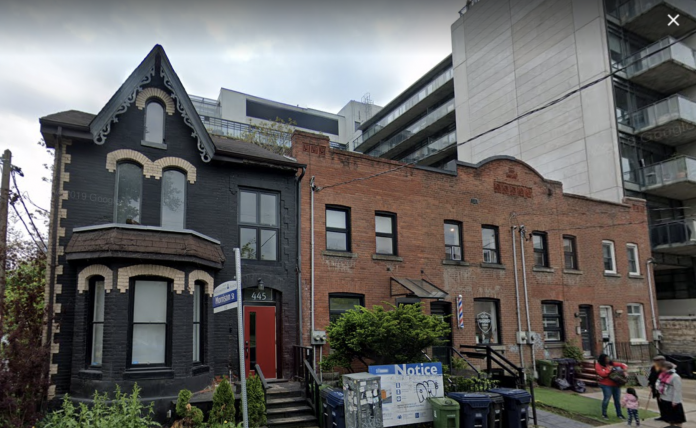 Developers propose to turn a Toronto site at 445 Adelaide W., currently occupied by a couple of 100-plus year old buildings, into a 146-suite Hudson Hotel.

Original plans (from 2017) were to build a mid-rise office tower on the property in Toronto’s fashion district. Urban Toronto reports that proposal is still under appeal at the Local Planning Appeal Tribunal (LPAT).

However, the architects Alliance-designed proposal for Niche Development has now been resubmitted for rezoning with the new plan calling for a hotel instead, accompanied by a new design. The planned building will include restaurants, a cafe, and other amenities

A news release says the project will be developed by Lamb Development Corp. and IE Hospitality.

“I am very proud to see the iconic Hudson Hotel take its legacy outside of New York in the cosmopolitan city of Toronto,” sbe founder and CEO Sam Nazarian said in a statement. “This marks the beginning of the Hudson brand’s global expansion and continuation of its innovation and well-known fame. We couldn’t be prouder to work with Lamb Development Corp and IE Hospitality, the most respected and well-known industry leaders, on this project and appreciate the trust they’ve put in sbe to bring one of the hospitality world’s true originals to Toronto.”

“This hotel is going to be fantastic. Architecturally it is stunning. It is a 146 room standalone hotel i.e., no condos, so we will be focused 100 per cent on hotel guests. Our rooftop bar/restaurant overlooks the park and the skyline. It’s going to be a hot ticket,” said Brad J. Lamb, founder of Lamb Development Corp., better known for a variety of condo projects in the GTA.

The development is subject to municipal approvals, with hearings scheduled for Spring 2020.

Approval is not 100 per cent certain. An Urban Toronto poster observed on Dec. 4: “Just FYI this is going to City Council in December with a recommendation to designate the properties. I wrote to Councillor Cressy and the Mayor to encourage them to adopt this item and seek to maintain the properties in situ.”