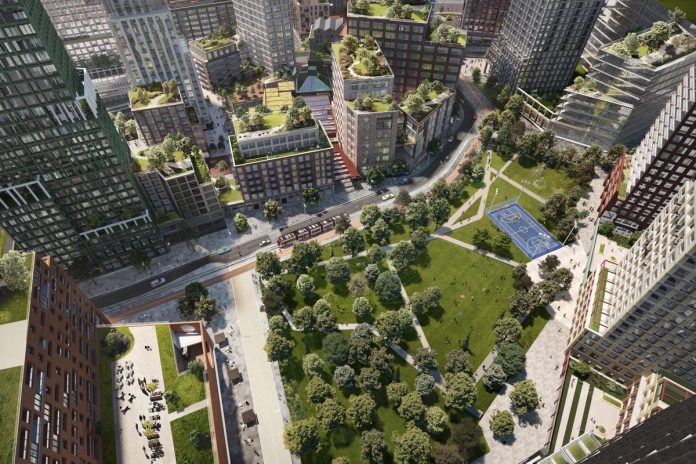 Developers have proposed an extensive project on a 28-acre site in Etobicoke.

The proposed development at 2150 Lake Shore Blvd. W. will employ 4,500 people in offices and retail businesses, and house 13,000 – with parks, schools and community centres.

The surrounding Humber Bay Shores neighbourhood is a “dense, isolated cluster of high-rise condo towers that has tumbled up over the past 30 years,” The Globe and Mail reported last Saturday (July 9) in describing the project.

The architects’ vision: “The urban picturesque,” Allies and Morrison partner-in-charge Alfredo Carbello told the newspaper. The concept drives from 18th-century English aesthetics, which “is a strange place to begin,” Caraballo says. It is based on two simple ideas: that the visual experience of a place is critical, and that irregular things are beautiful.

Accordingly there will be a generous selection of parks and plazas designed by landscape architects at Toronto’s DTAH and London’s Gross/Max. “The spaces come first, and then the buildings follow,” Caraballo says. “We think that if we get these places right, then the neighbourhood is going to work.”

The open spaces will vary, and are designed with randomness in mind, with angled intersections and some streets as narrow as six metres wide.

A central feature of the plan is U-shaped road, a “loop of charms,” Caraballo says in the published report, “on which something interesting happens on every corner.”

The key road “connects the large park, retail, offices and homes with a rebuilt GO Transit station and TTC streetcar terminus,” the story says. “In the middle of the loop, a varied collection of buildings frames an open-air “galleria” with retail and co-working space.”

“(The project) breaks with every rule we’ve created in Toronto, but in the best possible way,” says Cyndi Rottenberg-Walker, a partner at the urban design and planning firm Urban Strategies, which is also working on the project. “And to their credit, city planning has been very supportive.” She points to the high-low, big-small rhythm of the architecture, and the irregular street pattern.

Architectural detail will be just as important. “There was a lot of work on how these buildings come together on the ground,” Caraballo says. “How do we integrate a food store? How do we give the entrances legibility? The architecture has diversity, because this a piece of city. We don’t want all the buildings to look the same.”

As an example, in the first phase, architectural materials include several colours of brick; red concrete; a grocery store that looks like a glass-and-steel greenhouse; and an entire building clad in pistachio-green concrete. “We have been aiming to make the design practical, but also to bring delight,” Caraballo says.

However, the published report suggests the developer and architects’ vision may run into problems with Toronto planning rules and standards.

“Will city officials accept the unusual design of the streets and arrangement of the buildings? Already some of the roads and squares appear to be a bit too wide. City standards will push for them to be wider.”