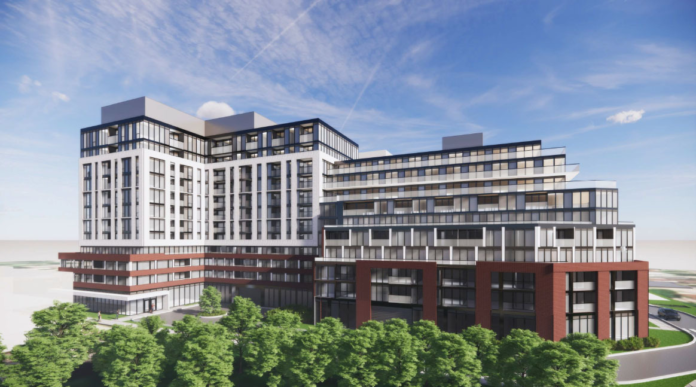 Davpart has submitted a rezoning application to the City of Toronto to build a mid-rise rental building on Keele Street north of Victory Drive in North York’s Downsview area.

The planned project at 2028 and 2810 Keele St. would bring nearly 300 apartments, replacing a four-storey rental apartment building and a single-storey single detached dwelling. These structures have 54 units.

Architect Turner Fleischer designed the L-shaped mid-rise apartment building with a ground floor lobby space and live/work units oriented towards the street edge, providing potential spill-out opportunities at grade level. The live/work units feature a flexible space design and can be converted into commercial units as the community’s needs change.

There will be 290 dwelling units in a total 22,923 sq. m. gross floor area, with a density 3.44 times the lot area. These will include 288 apartments (including 54 rental replacement units), four live/work units, and two semi-detached three bedroom units.

The developers propose 630 sq. m. of indoor amenity space on the ground and eleventh floors, with access to a rooftop terrace. They propose 165 underground parking spaces and 309 bicycle spots.