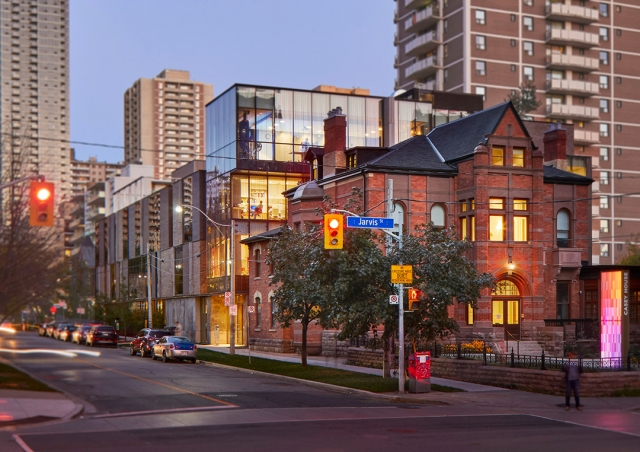 “While carefully restoring the original century‐old house, the expansion offers comfort, light and beauty to a population that has historically been underserved. The intimacy of the plan and the rich materiality turns the idea of a clinical environment on its head,” the jury stated with regards to Casey House. “The material palette is extensive and the discrete formal elements are many, but are handled with exceptional rigour and care, thereby transcending the ornate.”

“The façade’s varied articulation and massing keep the new building in scale with the original building, as well as maintaining a harmonious ambiance and human scale for the workers, patients, residents and neighbours,”

Located near the shoreline of Lake Ontario, the 24,000 sq. ft. Fort York Visitor Centre is designed to let visitors know about its historical significance. This public building commemorates the 1813 Battle of York when the city was defended against invading American troops. Patkau Architects led the endeavor, with efforts from Kearns Mancini Architects, creating a structure resembling a fortification complete with soaring weathering steel panel walls.

“This building is a powerful and robust intervention that serves as a threshold between the historic and the contemporary. Its linear plan and attenuated promenade builds on that edge condition of the on‐site expressway,” the jury said of the structure. “Its robust materiality and relentlessly repeated forms suggest the ramparts of the original fort. The design unapologetically celebrates the infrastructure around it and invokes the concept of earth and the idea of fortification.”

“Yet the Corten‐steel canopies over the doorways provide both a welcoming entrance to this museum.”

The Governor General’s Medals in Architecture were created by the Royal Architectural Institute of Canada (RAIC) and awarded in conjunction with the Canada Council for the Arts. Throughout the adjudication process, according to RAIC, the five‐member jury considered components such as innovation and uniqueness, sustainable design, detailing, conceptual clarity, and compatibility with the site.

“The recipients of the 2018 Governor General’s Medal’s in Architecture demonstrate excellence of design and diversity of purpose,” said RAIC resident Michael Cox, FRAIC.

“In each project, it’s clear that the site is important, with the architects drawing inspiration from cultural and natural history. The RAIC is proud to advocate for the quality of our environments by recognizing these examples of the best contemporary architecture in Canada,” Cox added. “I’m delighted to see that two of the projects are by Gilles Saucier and Andre Perrotte who are also this year’s recipients of the RAIC Gold Medal.”

Simon Brault, director and CEO of the Canada Council for the Arts said architecture is a powerful art form that can affect people in their daily lives.

“It can inspire us, soothe us, transport us to other realms,” Brault added. “The winners of the 2018 Governor General’s Medals in Architecture can be justly proud that they have designed places that, for instance, motivate athletes to surpass themselves, appease the suffering of people grappling with illness, or build bridges to the past. These winners have not been afraid to break with convention.”

The awards will be presented in the fall during a ceremony in Ottawa.

Toronto’s Limberlost Place one of 20 winners at upcoming World Architectural...