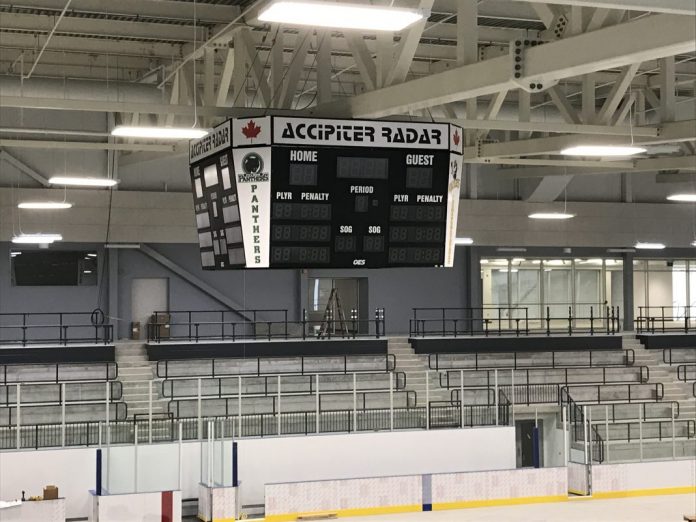 The $35 million 143,000 sq. ft. Pelham Community Centre opened its doors recently and promises to become a hub for the community.

Constructed by Ball Construction and designed by Petroff Partnership Architecture, the two-storey recreational facility includes two NHL-sized ice pads, one with 1,000 seats, along with a double gym and multi-purpose rooms.

The conventional steel structure has a PVC roof, combination brick veneer and zinc wall panels and a curtain wall envelope. Energy efficiency has also been factored into the envelope’s thermal values and the building infrastructure including mechanical systems, refrigeration plant and LED lighting. “The brick specified came from a sole source supplier in the U.S. so that was a bit of a hurdle,” says Desrosiers.

Additional spaces within the centre include an indoor walking/running track, a concession area, change rooms and an atrium/lobby area.

Desrosiers says the atrium is one of the more stunning features of the design. “The two-storey glass space includes a feature staircase with a glass balustrade and ceramic tile treads that is visible from the north and south entrances and wraps on top of the space.”

Plans for outside use include a pedestrian friendly gathering space to be added later.

In an early report on the project Ball’s project manager Robert Nippell noted that Ball invited design specialists to submit proposals for mechanical, electrical, refrigeration and sprinkler systems in order to bring cost effectiveness and cost control to these disciplines. “We also obtained competitive pricing for various trade packages after carefully screening the bidders based on past experience. Design estimate experience and sub-trade pricing was then used to help calculate the overall building area and design details.”

Desrosiers says these early cost saving exercises were critical. “It was determined that the size of the building had to increase by 9,000 sq ft. to create better flow and account for large hockey bags that travel through the space. The project was kept to the same budget through savings achieved elsewhere.”

He says a project of this size and scope requires greater co-ordination and communication, both internally and with major trades and suppliers.

One of the project partners to succeed in this effort is OES Scoreboards, part of the OES Inc. group of companies, who lent its expertise in customizing, manufacturing and installing scoring and timing solutions to help offer the best possible spectator experience to its patrons.

Since 1994 OES has been an innovator in the scoring industry with scoreboards, video displays, scoring and timing technology products enthusiastically adopted globally. According to sales representative Dana Plant, OES is one of the two scoreboard companies whose scoring and timing products are approved for use by the NBA, NHL, CFL, NFL, MLS, and MLB.

In the gymnasium, the company built and installed corner-mounted basketball scoreboards and basketball shot clocks.

Plant says that as the OES Scoreboards sales representative, her role was to lead her team’s contribution to the project and act as the liaison between Ball Construction and the town of Pelham on scoring and timing designs and product installations.

She says OES has established a reputation for exceptional customer service, talented in-house engineers and expertise in offering high-quality, custom solutions for sports venue and community facilities. “As a result, we often collaborate on facility building projects with contractors, architects and builders who are looking to add fan engagement and visual displays to the plans. OES has had the pleasure of partnering with Ball Construction to provide scoring and timing solutions on other projects in Ontario. These projects include the Steve Kerr Memorial Complex, Listowel ON and the Yardmen Arena, home of the Belleville Senators (AHL) in Belleville ON. We also provided Ball Construction scoring tables for their Kitchener Titans, when the team joined the National Basketball League (NBL) of Canada in 2016.”

Plant says that maximizing sponsorship opportunities can be a great way for facilities to help offset the cost of the scoring and timing equipment. However, there can be challenges coordinating the layout and approval of logos when a scoreboard includes multiple sponsors. “We utilized our talented graphic designer and made sure to continually engage sponsors to ensure they, and the town of Pelham, felt their logos and brand would be displayed in the best possible visual way.”

With all of the components designed and built in-house in London, Plant says OES has the capacity to fully customize scoring and timing solutions to meet a project or customer’s unique requirements. In the case of the Pelham Community Centre, she says the team was asked to include a third line on the scoreboards that would show a player’s numbers and penalty minutes. “Most scoreboards only display two player numbers and their penalty minutes but we were able to easily customize our design and build the scoreboards to meet this request.”

“The Pelham Community Centre is a wonderful example of how many different subcontractors, service experts and equipment suppliers can come together, build a collaborative working environment and achieve overall success through dedication to their craft. It was an absolute pleasure to work with Ball Construction and the town of Pelham on this project. The impact this community centre will have on Pelham and its surrounding communities will be felt for generations to come.”