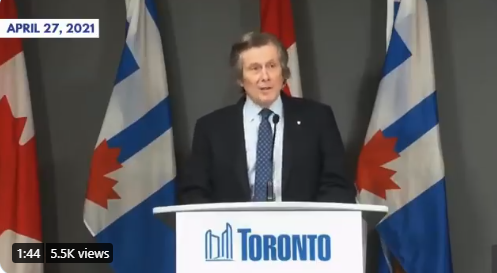 Netflix has announced plans to open its Canadian headquarters in Toronto.

“As we grow our business and presence all across Canada, we’re excited that Toronto will be our first local office,” Ted Sarandos, Netflix’s co-chief executive and chief content officer, said in a statement.

“We’re looking forward to opening our doors and building on the great work we’ve started with our creative partners to bring more Canadian artists and stories to the world.”

“We have been working hard to make sure Netflix’s new Canadian office would be in Toronto,” Tory said. “We put together a bid book in days to make the case for Netflix to locate here and engage with our creative industry. Our pitch was clear – Toronto is a film friendly city which welcomes and celebrates the screen industry, the quality and diversity of our talent pool is second to none, and we have a robust and ever-expanding production and post-production industry.”

While Toronto was already home to one of Netflix’s two Canadian Production Hubs, the company says this move will “shine an even brighter light on Canadian content.”

When the new office opens, Netflix will expand its commitment to working with Canadian talent, building on the success of uniquely Canadian shows such as Schitt’s Creek, Blown Away and Anne with an E.

Mayor Tory says Toronto looks forward to being home to Netflix “as they support the best creators here, and from every part of Canada”.

Netflix and the City have a shared commitment to supporting the growth and diversification of the sector, working with communities to support pathways to opportunities.

In 2019, the film, television and digital media sector contributed $2.2 billion to Toronto’s economy and employed more than 30,000 people. The film and television industry has adapted to COVID-19 regulations, with robust health and safety guidelines and will be a driver of ongoing economic recovery in 2021 and beyond.

“Toronto’s Film and TV sector has been thriving and growing and an increasing number of productions are choosing our city for their next project. In 2019, the sector employed more than 30,000 people and contributed $2.2 billion to Toronto’s economy,” said Deputy Mayor Michael Thompson.

“Thanks to our partnerships with industry leaders such as Netflix, the local industry has completely rebounded – operating at pre-pandemic levels – and is on track to have another record-setting year in 2021.”