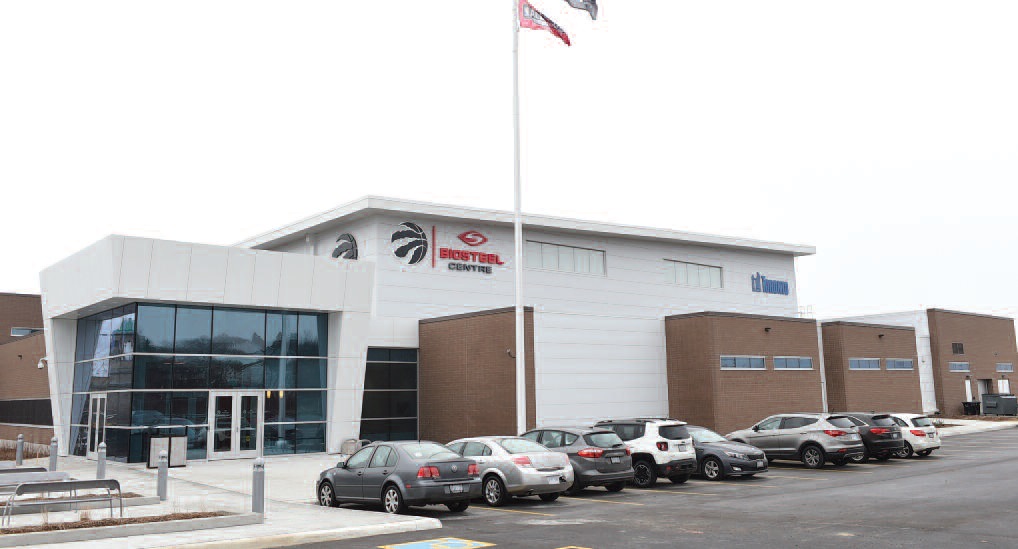 The Toronto Raptors’ new $38 million 68,000 sq. ft. practice facility opened in February. Besides serving as the team’s state of the art training site, the centre provides an operational base that suitably recognizes the Raptors’ current star status as tops in the NBA Atlantic division.

Located just west of the BMO Field at Exhibition Place in Toronto, the two-storey structure has been constructed by EllisDon and designed by Baldwin & Franklin Architects with Oklahoma based architects Guernsey. Birnie Electric Ltd. is the electrical contractor.

Robert Hunter, chief project development officer with Maple Leaf Sports and Entertainment Group (MLSE), parent company to the Raptors, the Toronto Maple Leafs, Toronto FC and the Toronto Marlies (AHL), says the centre has been a long time coming. “This is something we’ve been talking about for 12 years but we needed the right site and it had to be at the right time.”

He says the new centre has more than triple the space the team had at the Air Canada Centre and includes two full size courts, a players’ locker room and lounge, a barber shop, a large fitness and weight room, a medical and rehabilitation area with an underwater treadmill, and a full service kitchen and dining room, meeting rooms and a 26-person theatre where the team can watch game footage.

Team operations have also been moved into the Biosteel Centre to create communications synergies, bringing every aspect of the organization together.

The centre also includes a second court, which will help facilitate the 1,235 hours of community use – one of the conditions set prior to construction. User groups include Toronto Parks and Recreation, the Toronto District School Board and Toronto Catholic District School Board, the Ontario Basketball Association (OBA), the Canadian National Exhibition Association (CNEA), and Canada Basketball, along with the Raptors’ own youth program.

“Though these programs will run primarily when the team is not on site, we hope this will be motivator for young athletes; a chance for them to see what they can strive to; a chance to dream.”

Constructed with energy efficiency in mind, the building uses a large amount of bird friendly glass and incorporates a green roof. “There is also a second level terrace running almost the length of the building and looking over Lake Ontario that is a wonderful addition we hope the players take advantage of.”

Hunter says the project achieved the team’s goals and vision and also delivered great value, within budget and within a tight, 13-month construction schedule. “We had a mandate to be ready for the 2016 NBA All-Star Game so visiting teams had the opportunity to tour through. Every member of the construction and design team brought their A-game and made it happen.”

Craig Hanley, Birnie Electric vice president, pre-construction, says one of the project’s key milestones was achieved in October. “There was a big push to get the building closed in and the power on because the gym floor required a precise humidity control to be laid.”

He says the electrical detail in the building includes large amounts of communication and audio visual cabling. With equipment and parts coming from all over North America, the effort required close coordination and a focus on scheduling equipment to arrive as soon as was possible, Hanley said.

Hanley said that “if it weren’t for the close working relationship with the M+E engineering firm MCW Consultants Ltd. and the project management firm ICON Venue Group in making decisions expediently, we would never have been able to complete the work in a timely manner.”

He credits the project’s success to EllisDon who “guided the ship” and to the rest of the project team who stepped up and worked together to get the job done. For instance, he says close co-ordination with Foursite Drywall and Sprint Mechanical contractors ensured no one was impacting the work of the other trade.

“We’ve worked with several members of the project team before. That comfort in knowing everyone can deliver and in knowing what can be expected in terms of quality makes the entire operation much smoother.”

Hanley says Birnie is very proud to have been part of this project. “It is a beautiful facility that demonstrates a level of quality the construction team and the city can be extremely proud of. It was a pleasure to have had the opportunity to be involved.”

Hunter said the pride and excitement the construction team demonstrated through the project was reflected in the team the first time they had the opportunity to practice in their new home. “The wow factor was there. They were excited, thrilled and proud to be in what is now the best practice facility in the NBA.”

In designing the Toronto Raptors’ new Biosteel Centre, Baldwin & Franklin Architects Inc. worked closely with U.S. based sport-centered firm Guernsey, to focus on qualities that would honour and support the tremendous effort that goes into creating a winning team.

Mark Franklin, Baldwin & Franklin president, says though fans often obsess about the glamour of professional athletics, studied up close, the skills that are admired are the product of tremendous applied effort by the athletes and the people and technologies that support them.

Understanding that athletes refine their talent through hard work, he says the primary design objective for this project was to show respect for that effort – to make the various working spaces visually diverse, and to provide best in class technological support.

“Making the project periodically accessible for amateur and semi-pro competitors, motivates those athletes with glimpses of what might be, and how they might get there,” he said. Franklin says at the heart of the building are two regulation courts, detailed to NBA’s exacting standards. Support staff including trainers, coaches and front office are situated to maintain visual contact with the courts as a constant reminder, he says, that the real team business happens on those wood floors.

He says the project has a pronounced emphasis on the whole athlete, with nutrition and fitness front and centre. “Interactions between players and support staff are encouraged by careful arrangement of traffic flows and placement of transparent walls, but also remotely.”

Franklin says there was a challenge in achieving a balance between the privacy of players and making the building open to its surrounding context. Carefully placed transoms, opaque glazing and vegetation allow for natural light in almost every occupied area, while protecting privacy where necessary.

“Removed from the playing surfaces are functions directed to the outside world – press, public relations, player outreach. Spaces associated with respite from work – lounges, dining areas – look outward over the lake, with episodic visual connections back into the courts from windows and balconies.”

He says the principles of teamwork apply equally in professional sport as they do in construction. “Projects thrive or suffer in direct proportion to the determination of a small group to work together. As with most project teams, this one had both rookies and veterans but it benefitted from the continued participation of a client who was determined to deliver superior results.”