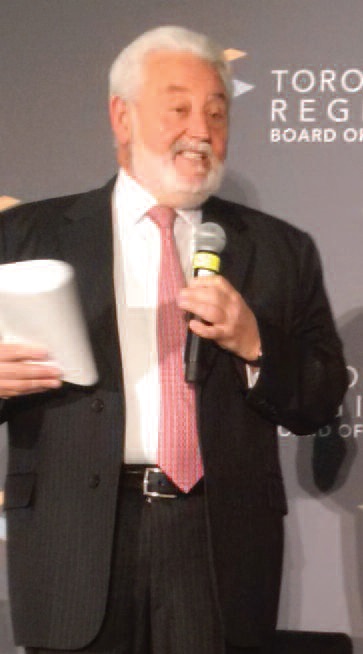 Labour organizations, notably Carpenters Local 27, have thrown their support behind an initiative to bring a World’s Fair to Toronto in 2025.

A local delegation of private, government and union leaders invited the secretary general of the Bureau International des Expositions (BIE) – the intergovernmental organization that regulates and oversees world expos – to visit Toronto in January to see firsthand what the city has to offer.

Proponents of the exposition believe that the six-month event would be the catalyst to develop the Port Lands; 880 acres of underutilized land 10 minutes southwest of the city’s centre.

“You can imagine the spinoff benefits to our tourism, IT, entertainment industries,” he said. Yorke said the Residential and Civil Construction Alliance of Ontario (RCCAO)’s Andy Manahan is also a strong supporter of the initiative, as is Ken Tanebaum of the Kilmer Group that built the Pan Am Village and went on the tour with the BIE’s secretary general, Dr. Vincente Loscertales.

The expo would create work for Carpenters Union members in constructing exhibit buildings and associated structures – and the land would require much infrastructure work, including utilities and roads.

Toronto city councillor Kristyn Wong- Tam said the exposition would require only about 400 acres. “Once the expo leaves the Port Lands, then the City of Toronto would have an entire new community to build out, perhaps with some residential, mixed-use office space, while still keeping industrial uses in the area because it is still an active port.”

“This expo can link in and mesh with the long-term vision for our waterfront,” Yorke said.