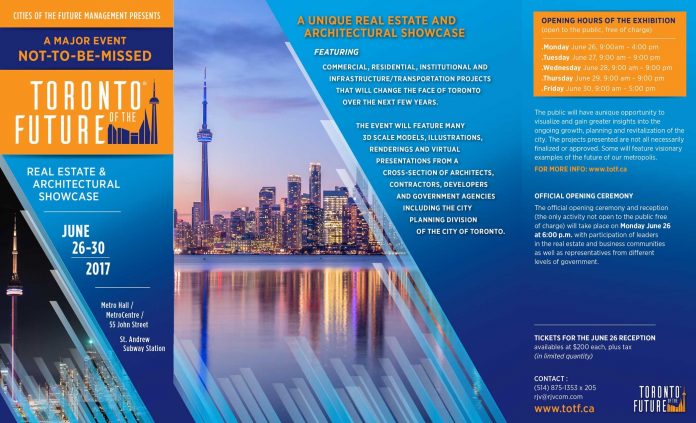 Leading players in real estate and architecture will present the second biennial edition of Toronto of the Future, a display of ideas for commercial, industrial and residential developments and urban infrastructure and transportation projects that event organizers say will shape the city in the years to come.

The free exhibit of major architectural concepts from June to 26 to 30 at MetroCentre/Metro Hall (55 John St.) is co-hosted in collaboration with the City of Toronto and Oxford Properties Group. The first biennial edition of the event was held in the same venue in June 2015.

The event will feature 3D scale models, illustrations, renderings and virtual presentations from architects, contractors, developers and government agencies, including the City of Toronto’s planning division. The displays will include various projects under construction, approved, planned or envisioned, “but all will inspire the conversation of the evolution of a great city,” a media release says. “Key stakeholders from the private and public sectors will be brought together to demonstrate to the public and media their leadership in contributing to the evolution of Toronto.”

Thousands of visitors are expected to tour the showcase, in addition to the many people who pass through Metro Hall/MetroCentre every day.

“Toronto is a leading city in the Western Hemisphere with respect to the unprecedented scale of urbanization, redevelopment and renewal we see today,” says Jennifer Keesmaat, chief planner, City Planning Division of the City of Toronto. “We expect this trend of rapid change to continue and as a result we need to continue to push our thinking with respect to what the city could become. As a result, the timing is excellent to present TORONTO OF THE FUTURE.”

The official opening ceremony and reception (the only activity not open to the public free of charge) will take place on Monday June 26 at 6:00 p.m. in the King Tower Wintergarden, MetroCentre (225 King Street West) and will feature special guest Jennifer Keesmaat, Chief Planner, City Planning Division, City of Toronto. The cocktail reception will begin with speeches and a symbolic ribbon cutting ceremony. A cocktail reception will then follow. Wine, beer and hors d’oeuvres will be served. To purchase tickets ($200 + tax each, in limited quantity), please contact rjv@rjvcom.com.