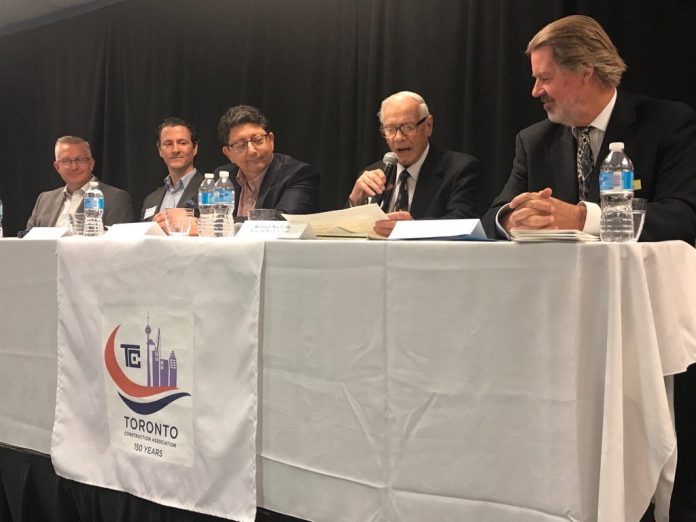 Toronto Construction Association (TCA) members at the annual spring Members’ Day open house in May were invited to a panel discussion about the industry’s past, present and future.

Elaborating on his personal experience, Nicholls said that training onsite staff was super important and that included the bricklayers, carpenters, plumbers and electricians. “We use to build a building with plumb bobs,” he told the gathering. “We laid out buildings with steel squares. You couldn’t build a building without steel squares and a slide rule. We had a computer. It was a six-sided ruler and that’s what we used and believe me it worked.”

Frank Decaria, who started his construction industry career in 1978, spoke about seeing people get smarter over the span of his career.

“Currently we are pushing the limits, technology is great but it’s what’s between our ears and how we use our intellectual intelligence or property to really solve challenges in a collaborative process,” he said. “It comes down to really applying ourselves and challenging ourselves.”

“These young folks are doing virtual construction and it’s amazing what they can do but what’s lacking is the day-to-day experience of actually building and dealing with the challenges that we have dealt with and continue to deal with every day.”

Marcus Gillam discussed the importance of being able to change and adapt to how the world is changing. “In a world of change, to stay relevant we have to change ourselves. If you want a successful business over the long term, then you cannot ignore factors and challenges we are facing today, you need a company culture that supports innovation. I don’t think it’s ever been this difficult to do what we’re doing. So, I think in order to survive, you’ve got to think outside the box.”

Markku Allison said it was likely that most companies have already “engaged in things like prefabrication but the future is where prefab is the rule, not the exception, where huge portions of our buildings will be built in controlled environments and then erected onsite.”

He said that “mechanization, such as robotics and drone technology, and new materials, such as flexible concrete, self-healing concrete and transparent aluminum, are also expected to become more prevalent.”