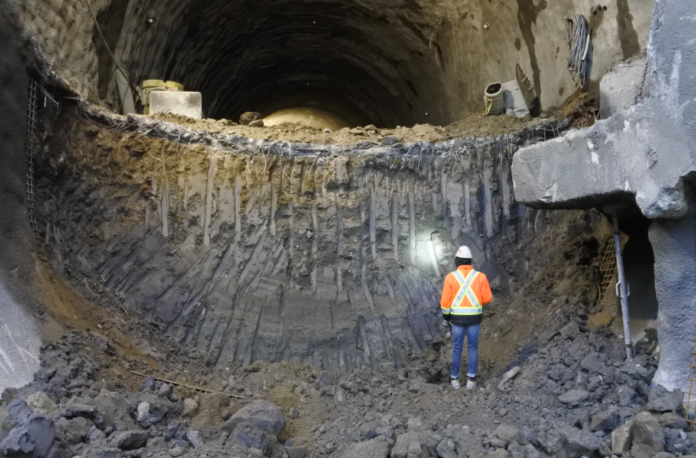 Crews have reached another milestone in the new rail passage in the heart of some of the busiest highway traffic in Canada – 100 per cent excavation in tunnel two. Since March, heavy machinery has been digging through rock and debris in the second tunnel.

Each rail tunnel under Highways 401 and 409 is approximately 180 metres in length, or about 360 metres when combined, with an excavation that is 11 metres high by 9 metres wide.

Both tunnels involved the removal of approximately 70,000 cubic metres of material.

Toronto Tunnel Partners is the project consortium constructing the twin tunnel structure at a cost of $116.9 million.

The tunnel completion milestone represents a significant achievement in Ontario’s GO Expansion program supporting the creation of a modern, sustainable rail transit network in the province.

“This tunnel project will help increase capacity on the Kitchener corridor and, where possible, support all-day trips, in both directions to reduce congestion,” said Caroline Mulroney, minister of transportation. “Our goal is to establish a more reliable rail transit system in the Greater Golden Horseshoe, which will drive significant economic growth and job creation that will benefit the entire province.”

When the digging finally reached the median, the only way to breakthrough to the other side was to cut open a three-quarter inch thick steel wall with a torch. It took three days of focus to cut and remove sections with an excavator.

The Highway 401 and 409 Rail Tunnel Project includes a twin tunnel structure, and when complete, will provide space for two additional tracks in the future. Track, signaling, and communications infrastructure will be installed under a separate contract. Substantial completion for the 401 and 409 Rail Tunnel Project is expected to be reached in the second half of 2021.

“GO Expansion will transform the transportation network in the Greater Golden Horseshoe, allowing for more frequent travel across the region,” said Phil Verster, president and CEO of Metrolinx.

“This announcement and the work on the Kitchener line is a significant milestone which will eventually help get more people out of their cars and onto public transit, leading to a better quality of life for many people.”

Earlier in the project, multiple interlocking steel sheets were driven into the ground in between Highways 401 and 409 creating a square work area, at the median (mid-point). The sheet pile wall was installed before the tunnel was constructed. The area enclosed by these walls was then excavated, making a small work area below the highway.  The sheet pile walls allowed workers in the newly made work area to auger bore pipes which provided support for the tunnel structure – find out more about this innovative technology here.

To facilitate safe excavation of tunnel two, work began at the east portal to allow for construction to continue at tunnel one at the west portal to be completed. Working at the separate portals provides enough space for crews to maneuver and remove any large obstructions from the tunnels.

This project is just one of more than 20 major projects currently under construction to support the province’s GO Expansion program that will transform GO rail into a two-way, all-day rapid transit service every 15 minutes on core segments of the network.

“I want to applaud Toronto Tunnel Partners for their innovative work on the Highway 401 and 409 Rail Tunnel Project, which was constructed under 21 live lanes of traffic,” said Michael Lindsay, president and CEO of Infrastructure Ontario. “We are proud to support GO Expansion in the province and deliver system-wide infrastructure upgrades that will enable more frequent service.”

The project is one of more than 20 currently under construction to support the province’s GO Expansion program that will transform GO rail into a two-way, all-day rapid transit service every 15 minutes on core segments of the network.

“Largest and most complex” passive house project moves along in Hamilton