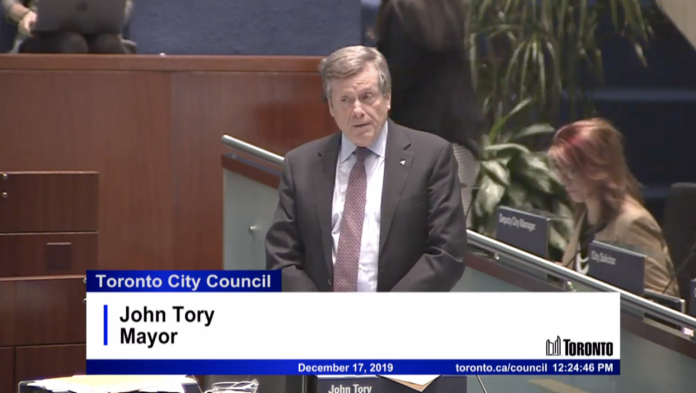 “Carpenters have been strong advocates for transit funding and for affordable housing funding for years,” CDC president Mike Yorke said in an interview.

“When we see someone stepping up to the plate as Mayor John Tory is doing, we are obligated to stand up and support him.”

Toronto Mayor John Tory presented a plan in December to extend an increase the City Building Fund to city council, which approved the motion in a 21 to 3 vote.

The decision means property taxes across the city will increase by an additional one percent in 2020 and 1.5 percent in each of the following five years. Funds will be dedicated to transit and affordable housing projects. The tax increase will reach 10.5 per cent in 2025. City staff estimate the additional cost per household over the six years will be about $326.

The levy will provide about $6.6 billion for new subways, subway signal systems, streetcars and station upgrades. It will also fund affordable housing projects to help the city reach its target of approving 40,000 housing units over the next 10 years.

“This funding is absolutely needed,” Mayor John Tory wrote in a Dec. 11 letter to council’s executive committee. “It is the only way, given the limited current tools available to us and the current political climate, that we can raise the billions of dollars we need to invest in the future of this city.”

The CDC issued a media release before the council vote, supporting Tory’s plan.

“I see every day the need for transit investment in the city and, as well, I see the need for affordable housing,” Yorke said. “That really concerns our members.”

Yorke and CDC members applaud Tory for his “bold leadership” to get transit moving and additional affordable housing built.

“Our organization has built this city and we have a commitment to the city,” York said. “Our economy is very strong right now and we can’t ignore people and their needs. We live in a city that can afford to raise the standards for all … and we can afford to give back a little.”

The CDC is composed of 16 affiliated local unions of the United Brotherhood of Carpenters and Joiners across the province. In total, they represent over 20,000 women and men working in a wide range of skilled trades including carpentry, drywall, resilient flooring, concrete formwork, underwater construction, welding, scaffolding, and other construction-related work.

In addition, the union represents many industrial workers and hundreds of highly skilled workers in Ontario’s healthcare sector.

Yorke said he recently spent time in San Francisco where he was shocked by the number of homeless people on the city streets.

“That shouldn’t be happening,” he said. “Not in a city like San Francisco. It was terrible to see.”

“We are pleased to see John take the bold leadership steps necessary to make sure (Toronto) remains a strong and healthy city.”

CDC members across the province are hopeful that the new funds will yield results for the city, because they are dedicated to transit and affordable housing – “and won’t get swallowed up in other city budgets in what is termed general revenue.”

“These new city infrastructure funds are clearly earmarked so that residents – and the rest of the province — can see real, concrete results,” he said.

They are also hopeful that the city will start a trend across the province, with Toronto city council leading the way for other municipal governments to find ways to fund improvements to their infrastructure.

Toronto’s unprecedented growth in population is expected to continue and, combined with the failure of other attempts to increase infrastructure funding, makes the expansion of the City Building Fund necessary.

“This is what the Mayor can do right here, right now in order to get it done.”

A recent independent study on affordable housing from Toronto developer Greenwin Inc. concluded that creating affordable housing options “leads to savings in police and healthcare budgets and reduces the need for homeless people to seek shelter at hospital emergency departments.”

“Infrastructure investment creates a ripple effect and is a win-win for jobs, the economy, and the city,” Yorke said.

Tory’s proposal comes after an Ernst and Young review concluded Toronto’s capital plan “may be unaffordable” without additional revenue. The consultants in their report advised that millions of dollars can be saved by seeking out more efficient processes and reducing waste, but these savings will not be sufficient to address the city’s infrastructure requirements.

In presentations, councillors observed that the city only works with 8 per cent of the available overall tax funds, with most tax revenue going to federal and provincial governments. Mayor Tory in his speech in support of the levy indicated the city will continue to push for fairer distribution of funds and user fees from other levels of government, but the city still needs to raise enough money to maintain its infrastructure.

He said the city remains committed to holding its operating budget tax increases at no more than the rate of inflation.

In his letter to the executive committee, Tory outlined how other attempts to raise funds had failed, including road tolls on the Gardiner Expressway and Don Valley Parkway being rejected by former premier Kathleen Wynne’s government. Also, additional gas tax revenues promised by the provincial Liberals were cut by the current government.

“We cannot lament the current political climate as a reason for inaction in our city,” Tory wrote. “This is the right thing to do to build up our city and protect its prosperity.”

In a recorded vote all councillors supported the building fund but three, Councillors Michael Ford, Anthony Perruzza and Stephen Holyday.

Councillors also approved a motion, put forward by Coun. Mike Colle, that would see property tax bill contain a line making clear the city only works with 8 per cent of tax revenue, compared to the  92 per cent that goes to the federal and provincial governments.