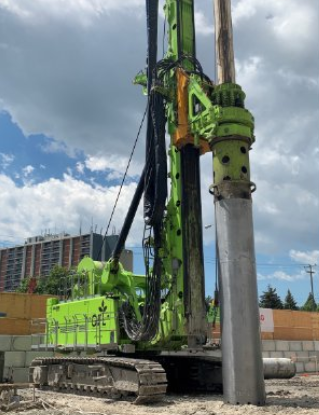 Fences are up, drill rigs are on site and officials gathered to launch the project that is part of a much larger connected system of transit routes and options and opportunities.

The new extension includes 7.8 kilometres of subway tracks and extend the system from downtown Toronto to the east end.

Just a few weeks ago, Strabag was awarded the tunnelling contract for the project and even before that, crews have been hard at work at the launch shaft site, where the tunnel boring machine will eventually be lowered into the ground.

“This project is about delivering the reliable and modern rapid transit the people of Scarborough need,” said Phil Verster, Metrolinx CEO and president. “We’re so glad that shovels are now in the ground and people are hard at work to turn long-discussed plans into reality.”

Large drill rigs on the site are over 33 metres tall and will be used to create a watertight, foundational wall around the launch shaft before excavation can begin. It will be a massive hole – about 28 metres wide, 80 metres long and 30 metres deep.

“To keep a massive excavation open and safe for the duration of construction and tunnelling, Strabag will create excavation supports, commonly referred to as a secant pile shoring system. It uses a series of concrete columns with steel reinforcements, called piles, to create a strong, water-tight barrier that holds soil and water in place and out of the excavated area,” he said.

Drill rigs have augers, a giant drill bit, that drills into each circular formation and inserts piles deep into the ground, around the perimeter of the future excavation.

Strabag will be drilling over 300 secant piles over the next few weeks to create a water-tight wall around this excavation before preparing for the arrival of the tunnel boring machine in early 2022.