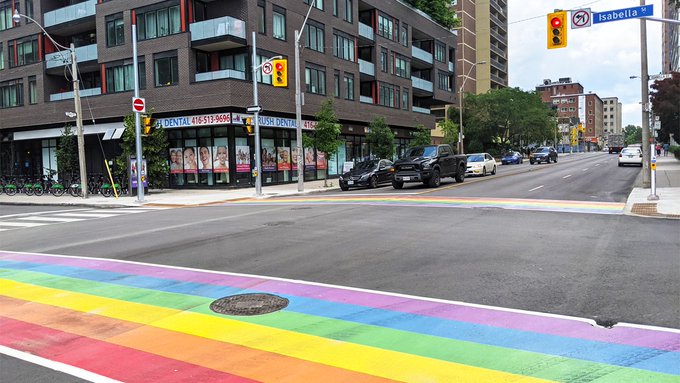 Details of all construction in the city are available here.

The intersection at College and Beverley Streets was re-opened last week after more than two months of emergency repairs due to a collapsed underground brick sewer, which dates back to 1873.

Brick sewers still exist in in many cities around the world, are reliable due to their construction and have a long lifespan. The collapse created a large sinkhole in the roadway and the underground repairs required a coordinated approach from the city, the TTC and other utility companies.

Completion of road resurfacing work on Church Street allowed for reinstated rainbow and transgender crosswalks to be painted during pride month. Construction work, which started March 8, was extensive along Church Street, between Gloucester Street and Park Road.

Through CaféTO, restaurants in the Wellington Street East and Church Street area will have access to expanded outdoor dining space this summer and ongoing construction work in the area has been paused until 2022.

Approximately five restaurants are approved for CaféTO locations along Wellington Street East, as well as other restaurants that will be approved as a result of the changes to the construction schedule.