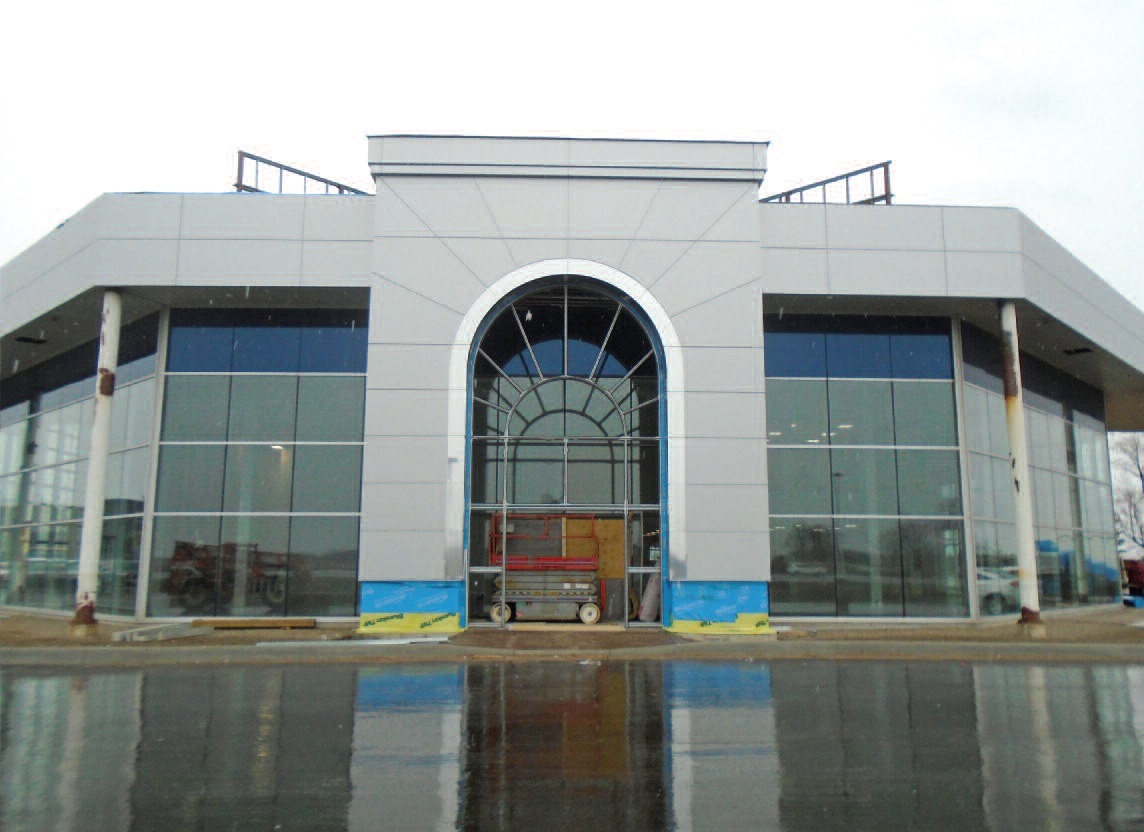 Bertram Construction (Ontario) Ltd. is applying its flexibility and expertise to navigate the changing design-build landscape to construct the new Innisfil 400 Chrysler dealership in Innisfil, near Barrie.

Project manager Curt Snoddon says the project’s work has been divided into two distinct phases. Phase one, which is expected to be completed later this year, involves a 13,000 sq. ft. existing building renovation.

“There was a marine dealership on the site before so the building was a big open space, not a lot of interior framing to deal with, and a basic concrete slab floor,” he said. “This meant there weren’t a lot of the surprises that usually accompany an interior renovation.”

This interior has received numerous upgrades already and work is ongoing to evolve and complete the vision for what will eventually become the dealership’s showroom.

Phase two, which has yet to begin, involves new construction which will triple the size of the building’s footprint through the addition of service capacity, including space for between 25 and 30 service bays. “There will also be a mezzanine and a large, glassed enclosed valet drive-through service style facility. Here, up to 14 customers will be able to drive into a climate controlled space, meet with a service representative, and have their vehicle moved for them to where it needs to be.”

The open concept glass and curtain wall will extend to the building’s exterior as well, allowing those outside a clear view of what is happening within. Snoddon says electrochromic glass will not only give the building a modern, clean feel, but will also control sunlight, glare and heat within the building.

He says the dealership owner has very innovative ideas and a good forward thinking visual sense, which works well with Chrysler’s flexible design. “The corporation has design criteria but they are open to other ideas. As long as their brand archway is present, many other details are open.”

For instance, Snoddon says the basic design called for a specific tile. Instead, the owner opted to select a deco flake epoxy floor finish that he preferred.

The 4,120 sq. m. site is located within both the Lake Simcoe Conservation Authority and the town of Innisfil and so is governed by the direction of both. “The town has deemed bulk washer fluid a fire hazard so this is something we will need to plan for and accommodate as we move forward in the next stages of design.”

With the intent to open in late 2016, Snoddon says sometimes these longer projects can create challenges for trades and subtrades. He says in this case, Bertram was able to hand pick its project partners based on past performance, their ability to commit longterm, and an understanding of who would be able to meet the project’s changing needs.