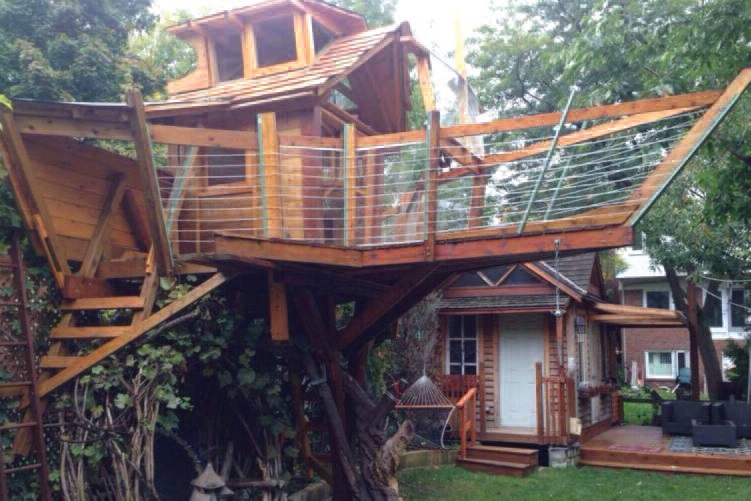 Yet he’s run into incredible snags, and received national publicity, because of a problem much closer to his home – a treehouse for his children in his home’s backyard. The $30,000 structure is no ordinary treehouse. It is shaped like a boat, has doors, windows, stairs and other features – but it is still meant as a play space for his and his wife Diana’s two children, Kristian, 10, and Mateas, 8.

In April, city building inspectors ordered the treehouse to be torn down, apparently after a neighbour’s complaint, and Alpeza received extensive media publicity as he highlighted the complexity and apparent absurdity of city rules.

Apparently, while no building permit is required for the treehouse, it exceeds zoning height limits, and so the Alpezas will require a minor zoning variance to avoid demolition. In part because of the media publicity, the demolition order has been put on hold, but John Alpeza is still concerned that municipal bureaucrats, unsure of how to classify the project, will throw more wrenches into the pot.

“Twenty-years ago we worked on the Bruce nuclear power plant” – but Alpeza has never had to deal with the challenges of residential zoning and building code requirements, including unhappy neighbours, one of whom has a leading role in the local neighbourhood association.

And this lack of residential experience may prove to be a challenge, because if inspectors insist that the treehouse be built to conventional building code standards, the project would, indeed, become an absurdity. Code size stairs, railings and windows designed for an adult use structure would undoubtedly be out of place for an outdoor kids’ treehouse. “The building code doesn’t have provisions for swings and stuff in the backyard that kids can use,” he said.

Alpeza says a few years ago vines and greenery surrounded the treehouse and shielded it from neighbours, but these were cut down and so the project is more visible. “I made it real nice, with the boat,” he said. “Everything was a lot of lot of work – nothing in there is square – I redid things I didn’t like; it was trial and error.”

He isn’t sure how the story will end. The publicity and political involvement have drawn attention to the project but Alpeza, familiar with the world of larger scale infrastructure projects, needs to contend with residential zoning and building code rules and a problem familiar to contractors and developers working in areas with single family homes – the NIMBY (Not In My Backyard) syndrome. “This is not a cookie cutter thing,” he said. “It’s not in the system.”