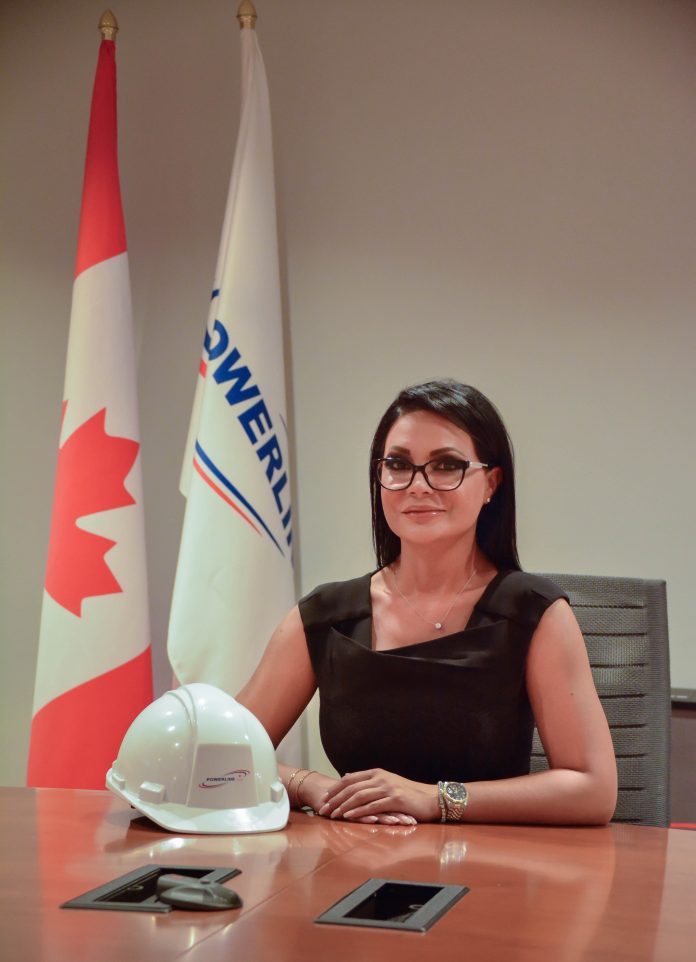 Giselle Matin has been an Ontario lawyer since 2011. In 2017, she was nominated for Canada’s Top 40 under 40 by the Toronto Board of Trade. She is also executive vice-president, legal with Powerline Plus, a company that provides solutions to public utilities, municipalities, developers and manufacturers.

Matin says she wanted to be a lawyer from a very young age. Her second passion has always been business.

“You could say business runs in my blood,” she says. “My father started Powerline in 1990, and in many ways, I grew up with, and in, Powerline. From a very young age, I was involved in whatever aspects I could.”

After being called to the Bar, she began to take on Powerline’s legal matters as the company’s general counsel, expanding her responsibilities, to become the business’s executive vice-president.

“My natural tendency to want to know how something works and expound a topic by learning more, has propelled my career, instilled confidence, and put me on a path I could have never imagined,” she says.

Today, she oversees Powerline’s public relations, human resources and health and safety departments as well all legal matters including RFPs, contracts, and proposals.

She says the industry’s predominantly male workforce has been a challenge. “Although I have been lucky by being surrounded by supportive colleagues, I will not shy away from saying that as a woman, it is a constant challenge to prove you are ‘just as good’, that you rightfully belong at the ‘table’ and to consistently break the glass ceiling.”

Overcoming that, she has found her greatest sense of accomplishment in her leadership abilities. “Leadership is about the team – the culture they keep and embrace. It’s about empathy for your customers, clients, employees and the communities where you do business. It’s about doing the right thing for the right reasons, being confident enough to take risks and responsible enough to think of those who your decisions and risks may affect.”

She also derives satisfaction from seeing the fruits of her team’s labour. “Driving around this beautiful city and seeing the infrastructure projects that Powerline was a part of, such as the PanAm Games Project and the Waterfront Revitalization Project, gives me a great sense of pride, knowing that we are involved in providing an essential emergency service and by keeping the lights on in the City of Toronto is a gratifying feeling.”

Matin also believes, as does Powerline, in giving back to the community. She provides support to the Breast Cancer Society, the Daily Bread Food Bank, the Electric Wheelchair Association and Habitat For Humanity.

Established in 1990, Powerline Plus has grown exponentially, both in size and stature, while rapidly moving to the industry’s forefront.

The company provides innovative, reliable and cost-effective solutions tailored to customers’ budgets, timelines and environmental concerns, says Gisele Matin, executive vice-president, legal. “Powerline has grown in both size and stature while rapidly moving to the forefront of the industry becoming one of the most prominent overhead and underground utility contractors in Ontario.”

Martin says Powerline’s strategy is to offer turnkey solutions of superior workmanship in a cost-effective and timely manner to be an industry leader. “Our team continuously strives to exceed customer expectations and industry standards. We take great pride in that many of our customers have been with us since our inception.”

Matin says Powerline’s turnkey solutions are unique. “Powerline has adapted a hybrid model for its growth. In its early adoption, it was based in assessing the corporations’ strongest strategic advantage both in geography (Toronto and the GTA) and in delivering a low-cost solution to high risk projects.”

“In its core application, and in order to respond to the requirement of the client, Powerline divided its service applications into three groups (design and engineering, civil and electrical construction), and assigned a manager to each portfolio.”

She says this core expertise, values and strength in turnkey operations has allowed Powerline to expand in other construction areas, providing  new services and products in utilities, road building and road maintenance, as well as offering design and technical support for various critical priority tasks such as break and fix applications, upgrades and validation engineering to electricity distributors to enhance their operations in a cost-effective framework.

“Powerline differentiates itself by providing a full-suite of services, all done without the use of subcontractors. By not utilizing and or relying on sub-contractors, Powerline is in complete control of the project and work from beginning to end on all fronts from meeting deadlines, costs, quality and workmanship which fully supports our mission and ultimately our overall strategy.”

Matin says that Powerline has won the designation of one of Canada’s Best Managed Companies for the past three years and is currently running for the fourth year. “If we are successful, that will place Powerline in the Gold Circle amongst other very successful and prestigious companies in Canada.”

She says Powerline has donated both time and money to: The Food Bank; Habitat For Humanity; the Breast Cancer Society of Canada; the Canadian Electric Wheelchair Hockey Association; and various hospitals in the Toronto and Scarborough Region.

The company is also a Platinum sponsor of the annual United Way Golf Tournament; and the annual Toronto Hydro Electric Systems Ltd. Golf Tournament, with funds going to the Ross Tilley Burn Centre at Sunnybrook Hospital.