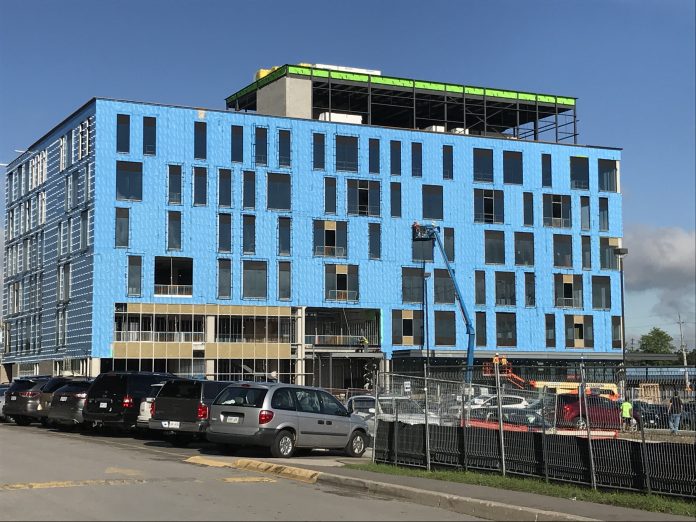 The $52 million Etobicoke Wellness Centre project demonstrates how collaboration and creativity can turn a hospital clinical, outpatient and professional services building into an exceptional, economical and community-friendly initiative.

The William Osler Health System (WOHS), which administers the hospital, decided to set out two separate contracts – one to rebuild and enhance the hospital, and the second to recreate the existing Ancillary Services Building to act as a gateway to the hospital campus which will serve as the hospital’s public gateway.

Margaret Knowles, Morguard’s senior vice-president of development, said initially there were challenges in structuring the deal to be viable. The hospital wanted to retain ownership of the building and land, granting a 40-year operating lease. But proponents competing for the opportunity were having trouble making the financing work, considering the leasehold length and the lack of ownership of the underlying land and building.

The solution, co-ordinated by Morguard, RBC Insurance, and WHOS, was for the hospital to lease back the structure, arranging for its own subtenants. This removed the biggest risk, facilitating the financing.

Bird and ARK then set out to design the six-storey structure to be functional and sustainable, yet appealing to patients and staff.

“There were specific design challenges,” says architect, Guela Solow, partner at ARK. “The building occupies the design space between a hospital and an office building.”

“This is a new building typology that created some wonderful opportunities and challenges,” she said. “It represented an opportunity to open up the hospital, making it more transparent, integrated with the street fabric and more accessible to the community.”

Beyond conventional office building standards, because of the services provided– including a multi-patient dialysis unit – there are challenging infection control and mechanical infrastructure requirements.

Typical hospital buildings “use materials that are easy to clean” such as stainless steel and hard plastics, that “send a message of unfamiliarity and intimidation,” Solow said.

Instead, designers sought to introduce “vibrant colour patterns,” she said. “Each floor has its own colour theme, and we incorporated images from the local Humber River Ravine to develop a way-finding mapping program, making it easy for patients and families to navigate the experience as they are walking through the building.”

Designers also achieved the gateway objective. The new building defines the streetscape with generous weather-protected canopies and entrances, while the in-patient hospital structure is behind the wellness centre, the new building acts as a literal bridge, linking the two buildings.

Meanwhile, Bird worked with ARK and Morguard through the design-build process (Bird guaranteed its price and schedule), taking the construction site risks. “The delivery of the Etobicoke Wellness Centre project represented an exciting opportunity for Bird,” says Bird project director Scott Reitsma. “This new gateway to the hospital is something the neighbourhood will welcome”.

There were co-ordination challenges, as a separate contractor, the Walsh Group, had responsibility for the main hospital building expansion, so the two teams needed to schedule and stage their work to overcome construction logistics and material delivery challenges.

William Osler is now getting the building ready for occupancy, through a separate tenant fi-tup contract with Buttcon Ltd.

“We’re proud to have been part of the team and to be selected by Morguard and Bird to be the architect,” said Solow. “The team worked in an integrated process, putting the design, construction and financial voices together to create exceptional results.”

“This building will speak to health  — it is more of a wellness model rather than an illness model – and the process really speaks to the big vision of health care for the future,” she said.

“Morguard is extremely proud to have been part of this project,” said Knowles.  “The cost per square foot is a fraction of the cost of a conventional hospital.  If you look at it from the taxpayers’ point of view, it is a very positive initiative in taking the non-critical functions out of the more restrictive hospital environment, in a friendlier space – and at a big cost advantage.”