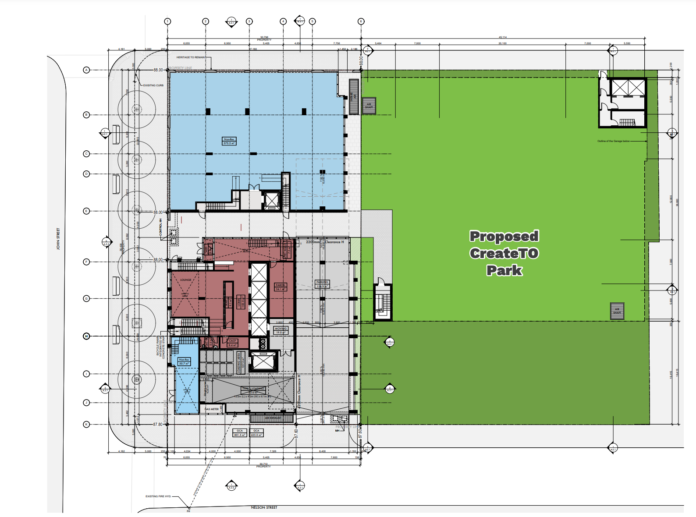 The Handy and Harmon Building at 241 Richmond St. was built in 1930 and is currently occupied by The Ballroom, while 133 John St. was constructed between 1875 and 1954, and previously was occupied by a Jack Astor’s restaurant.

The building will contain commercial uses within the ground floor and offer 470 residential units to the neighbourhood, DataBid.com reports.

ArchitectsAlliance designed the structure above  a two-tiered podium including the Handy and Harman Building’s facades in the north.

“The podium is divided at its base by a two-storey, open-air passageway that connects John Street to the new proposed urban park which is right next to the site to the east. The heritage walls restoration is being overseen by specialists ERA Architects,” DataBid reports.

Urban Toronto says the project will include 618 sq. m. of residential space and 1,410 sq. m. of retail. There will be 470 condo units including 43 studios, 309 one-bedrooms, 69 two-bedroom and 43 studios, with a four-level underground garage.

The design of the tower is a scaled-down idea by architectsAlliance of the 66-storey design that was originally proposed at 80 Bloor W. in 2013 for developer Krugarand Corporation. ArchitectsAlliance is no longer involved in the 80 Bloor West project.

Livabl by Buzz Buzz Home reports that the podium would range from two to seven storeys in height. The existing building at 133 John St. would also be removed because substantial modifications  to the building over the last few decades have diminished its heritage value.