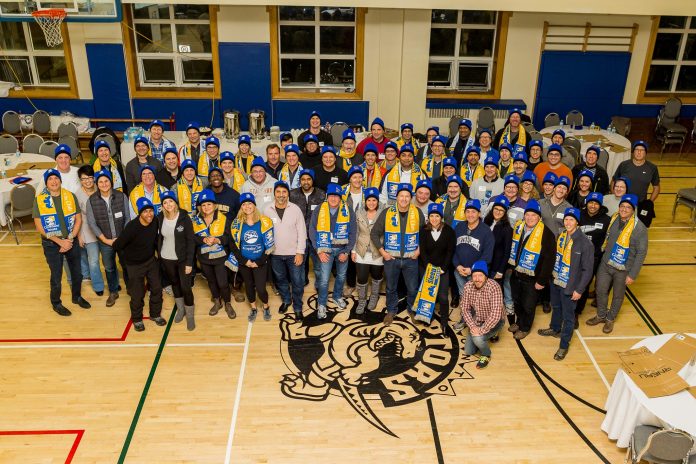 Business and community leaders in 18 cities across North America banded together in early November, sleeping on the streets as a show of solidarity with homeless youth.

A media release notes Sonnenberg raised more than $37,000 as part of his effort, making him one of the top five fundraisers amongst the 70 business and community leaders who collectively raised more than $1 million for homeless youth.

After the event, Sonnenberg shared a message: “Thank you for your contributions to this amazing organization. I once again had an experience of a lifetime, and learned more about how large and extensive the homeless youth issue is here in Toronto. I also learned through the testimonials from a number of former homeless youth, of the great work Covenant House does to build up the hope and confidence that is needed to re-enter society as stable, contributing citizens.”

He went on to say: “My evening began by having supper at a table with a young man. The deep sadness in his eyes pierced my heart. Occasionally, I saw a glimmer of hope – a hope that will need to be nurtured and grown so that he can move on to have a productive life. I then had a conversation with a youth worker who shared his story of being homeless when he was 16. With care, education and training provided by Covenant House, he was enabled to re-enter society and eventually returned to Covenant House as a youth worker. He said this was his way to give back.”

Sonnenberg says he heard testimonials from individuals explaining how Covenant House had helped them and attended a workshop in which a small group was tasked with “creating a budget for an individual planning to leave the services provided by Covenant House in order to map out a new life off the street.”

Despite their experience in managing businesses, he says thee group was challenged by the difficulty in relating to these specific challenges and the realities of the required budget. “Covenant House does excellent work helping youth with these important life skills so that they can find jobs and learn to survive on the wages they make in the first months after making their fresh start.”

Donations are still being accepted. For more information about Covenant House Toronto’s Sleep Out: Executive Edition and its participants, or to make a donation, please visit executivesleepout.ca.

Insurance: Do you use your vehicle for business use?