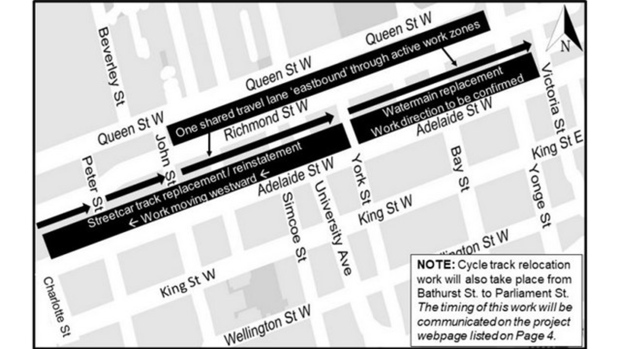 The City of Toronto and Toronto Transit Commission (TTC) will begin a series infrastructure upgrades on Adelaide Street this month.

Construction is expected to last several months and lead to the start of construction on the Ontario Line in 2023. Council has approved construction to occur 24 hours a day, seven days a week with the noisiest work, concrete breaking, restricted to 7 a.m. and 11 p.m. during the first few days of each phase of construction.

Watermain replacement and streetcar track reinstatement work is being carried out in advance of the upcoming construction of the Ontario Line subway by Metrolinx and the city will replace additional sections of watermain on Adelaide Street from Bathurst Street to Spadina Avenue, and Church Street to Jarvis Street.

Crews will also resurface the road from Bathurst Street to Spadina Avenue and Bay Street to Church Street.

The Ontario Line will eventually connect the Ontario Science Centre near Eglinton Avenue and Don Mills Road to Exhibition Place at the waterfront, with two stops along King Street — at Corktown and King and Bathurst – and four stops along Queen Street at Moss Park, Yonge Street, University Avenue and Spadina.

The city says it will be holding virtual ’trailer’ drop-in meetings every other Monday from 10 a.m. to 11 a.m., starting on Aug. 29 so that members of the public can ask questions and share concerns about the ongoing work.

Work on the Ontario Line is currently slated to be complete by 2028.