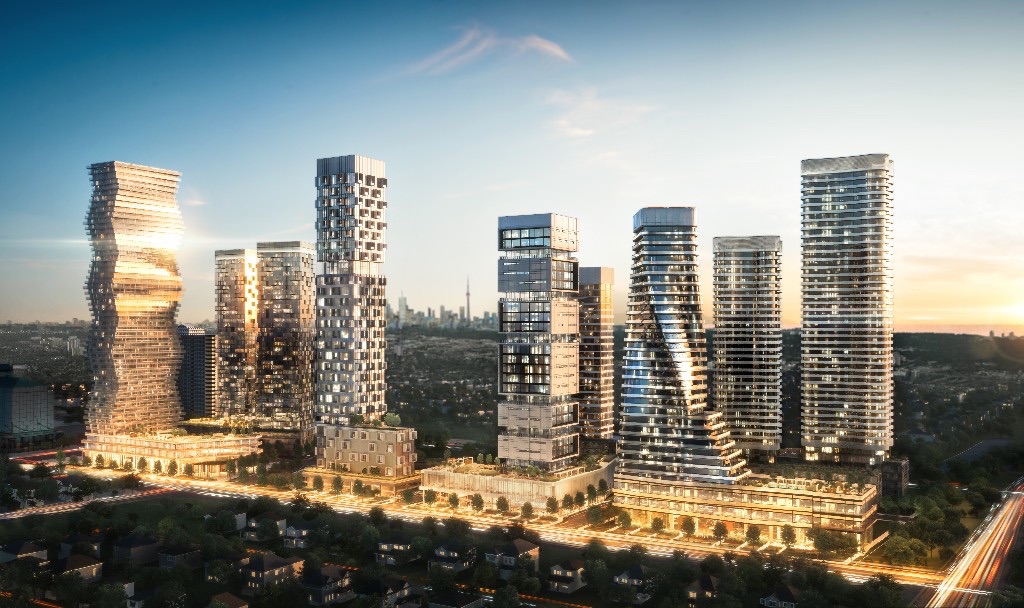 The project has been in development since 2007, when Rogers Real Estate Development enlisted developer Urban Capital Property Group to manage the process of turning “a long held family asset into a legacy community,” the news release says.

“Rogers has an enduring history with the City of Mississauga,” Edward Rogers said in the statement. “We believe in the city and in the vision that was set forward in Downtown21,” says Rogers. “With the help of Urban Capital and our development team, we aim to contribute to the evolution of Mississauga’s downtown. M City will be anchored by iconic design, it will prioritize public spaces and parkland, and it will offer residents the best technology available now and into the future.”

“Rogers Real Estate Development has put forward a bold, exciting and forward-looking vision for Mississauga’s growing, thriving and promising downtown,” Mississauga mayor Bonnie Crombie said. “These new planned developments by Rogers are consistent with the City of Mississauga’s commitment to build a livable, walkable city, home to mixed-use residential and commercial developments that are connected to an extensive public transit network.”

“Mississauga is off to a great start in establishing its downtown core,” Clinton said. “You have an identifiable eastern gateway with the Absolute Towers as well as some great public spaces in the area like Celebration Square, City Hall and the Living Arts Centre. The opportunity with M City was to define the western edge of downtown. That was our goal as we planned a walkable, sustainable mixed-use community that emphasizes the public realm.”

With frontage along Burnhamthorpe Rd. and connections north and south along Mary Fix Creek, the M City site enables a range of urban settings.

“We took our time to make sure we got every last detail right,” says Urban Capital Property Group partner Mark Reeve, who added that the M City Master Plan has been fully approved by the city. “Downtown Mississauga is undergoing intense urbanization. Its citizens are young and ambitious and represent a diverse, urban culture. That is why Rogers chose the name M City. They wanted the project to reflect their enthusiasm for downtown. It’s an enthusiasm that we share.”

M City will launch with a first tower after Rogers Real Estate Development Limited and Urban Capital held a design competition with three of Canada’s top architecture firms. CORE Architects delivered the  winning design with an undulating tower that rotates seven typical floor plates in repetition as it rises 51 storeys.

CORE Architects  has designed over 200 million sq. ft. of residential development across North America and internationally.

“CORE’s design is a stunning addition to Mississauga’s skyline,” Reeve said in the announcement. “Not only does it dialogue with celebrated architecture on the eastern end of downtown, but just as important is the way it interacts with the immediate streetscape. A lot of attention has been placed on the podium and how M City connects with its surroundings.”

“It is our hope that M City acts as a catalyst for the continued evolution of Mississauga’s downtown. It’s why we have taken on the challenge of developing this property. Being able to introduce over two acres of parkland is a part of the legacy we hope to leave behind,” says Rogers.