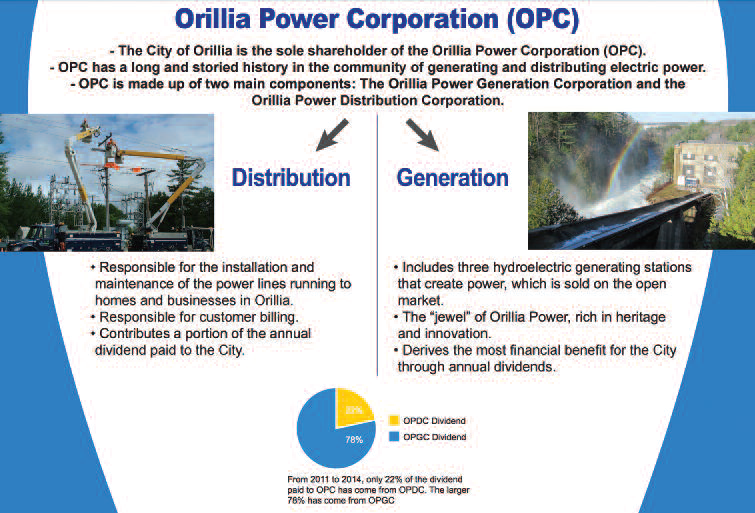 In turn, Hydro One will build an advanced technology hub in town, the Orillia Packet and Times reports.

Councillors decided to sell the utility during a special council meeting in a six to three vote.

“I think it’s a tremendous day for our city and, by extension, our citizens,” Mayor Steve Clarke told the Packet and Times at the end of the meeting. “As I alluded to earlier, years ago, we were fortunate enough to have Georgian College come to our city and (then) OPP General Headquarters and Lakehead in 2006. All those things had wonderful, significant economic impacts on our community and I believe this is just as transformational.”

The city will retain the generation arm of Orillia Power and will continue to benefit from its annual dividend. An Orillia “legacy fund” has been set up to take in the $26.35 million and another $10 million in OPDC debt picked up by Hydro One.

“That money will stay in there for perpetuity and we will use up to 95 per cent of the annual dividend that pays on the interest,” Clarke said. “It really puts us on a much more solid footing every year.”

As well, the city will receive about $3 million when Hydro One buys 16.41 acres of land in Horne Business Park for the first phase of its advanced technology hub. The newspaper reports that phase will include a back-up Ontario grid control centre/integrated systems operation centre. Two other buildings – a provincial warehouse and regional operations centre – will be built later, with Hydro One eventually purchasing all 36 acres of the business park.

That investment and the expected economic activity related to it are what helped convince the majority of council.

“This is a once-in-a-lifetime opportunity and will bring jobs to our community,” Coun. Pat Hehn said. “There will be more than just the high-paying jobs. There will be the spin-off jobs: the support jobs, the clerical jobs, as well. So, I’m excited by this.”

The city expects the hub to result in up to $300 million in “near-term economic impact.”

“Once all the facilities are operational, employees at this Orillia facility are expected to receive a cumulative $30 million in payroll income into the Orillia economy year after year,” Coun. Ralph Cipolla said. “This will result in the creation of new jobs and additional spending in housing, construction, retail, restaurants and personal services.”

However, three councillors voted against the deal – Mason Ainsworth, Robert Kloostra and Sarah Valiquette-Thompson – who said they weren’t convinced it was in the city’s best interests.

“I do think there are going to be some job cuts with Hydro One in the future,” Ainsworth said. “Are those going to affect some of these people? If they’re cutting jobs in the future, are those people going to be offered continued employment? Are they going to be relieved or absorbed or shipped off?”

Valiquette-Thompson said she was dissatisfied with the amount of public consultation that took place during the negotiations.

“I certainly support job creation and economic development,” she said. “Lack of public feedback, I don’t support. A majority of this deal was done in closed session. If we had an opportunity to engage the public more on this mega deal, and we had a majority of the government feeling confident with the information we could share, then I would feel much more comfortable going forward with this.”

Hydro One president and CEO Mayo Schmidt said a detailed assessment over the next year or two will help determine how much work needs to be put in to bring the current Orillia Power infrastructure up to Hydro One’s standards.

He said he is excited about the project. “Orillia is … a community that has employees that can satisfy our needs as an organization to properly run our centres,” said Schmidt. “Secondly, this is the kind of community that employees would be attracted to live in.”