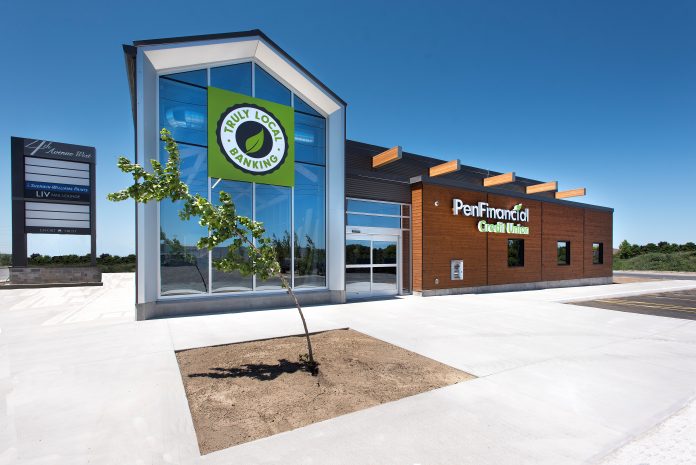 Quartek associate architect Sam Persano said PenFinancial had been in search of a unique building reflecting its rural membership, brand and light-hearted spirit. The structure’s design and materials reflect the Niagara Region’s farmland and the membership from which PenFinancial grew. “The building can be seen as a place of growth for PenFinancial and its local membership.”

Persano said many elements typically found in an exterior landscape were brought into the interior space and are consistent with the exterior aesthetic, resulting in a unique environment. The farm aesthetic allowed for the use of a wide range of materials such as metal, wood and stone.

“An exposed metal deck and glulam beam structure in the members’ lobby, for instance, maintains the agricultural feel,” he said. “There is also a small scale ‘greenhouse’ work area built of solid birch and fluted glass and barnboard clad teller stations.”

The large glazed boardroom/community room is also in a greenhouse form and contains an interior birch pergola structure from which hang large light fixtures resembling grapes, he said. “The carpeting and flooring is also reminiscent of an exterior deck with surrounding patio stones with a grassed area furnished with Muskoka chairs as a member waiting area.”

Offices have been designed in smaller pods with shaped ceilings and bright colours, providing an additional interior texture. “Everywhere one looks is another point of interest and we feel the complete exterior and interior package was achieved.”

The unique design approach means both tenants and members will experience a non-corporate atmosphere, which he says can reduce day-to day-stress. There was also a focused effort on hiding as much of the mechanical system as possible. “With the exception of a few compressors and a vent here and there, that goal was achieved.”

Persano says that although the building is part of a plaza ‘big box’ development, it distinguishes itself from the surrounding area and yet does not feel out of place. “The building is pretty transparent and welcoming and creates a sense of place or a landmark along Fourth Ave. The hope is that the building not only reflects PenFinancial but also the Niagara region.”

He says the project succeeded in part because of the relationship between the owner, consultant and architect. “The owner allowed us to be creative and break the mold of what a credit union may look like and the contractor worked with us on the various details to achieve the desired building. All parties involved truly felt as one team.”

Getting ready for the new Ontario Construction Act: Be ready for...