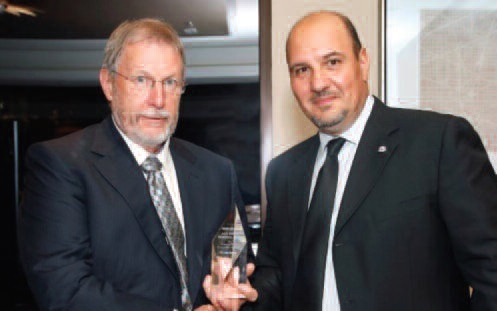 Jack Currie, director of eastern operations, corporate at Ledcor, has been honoured by the Ontario General Contractors’ Association (OGCA) with its Jock Tindale Memorial Award for integrity.

The OGCA created the award in 1998 to honour an individual in the industry who has demonstrated a high standard of ethics and integrity.

“If you look at his background, all the work he’s done in the industry, and his integrity in the industry, those were the qualifications that helped solidify his nomination,” OGCA president Clive Thurston said in a published announcement.

Currie, currently working with Ledcor in the Toronto market, has through his career, worked on several large projects across Ontario including Minto Yonge and Eglinton ($200 million), the Oshawa Centre expansion and renovation ($150 million), Corus Quay ($150 million) and a Terminal 3 project at Pearson International Airport ($130 million). Other projects include the River Run Centre in Guelph, the Vaughan Mills Mall expansion and renovation, and Erin Mills Town Centre.

More recently, before returning to the GTA, he worked in Calgary as the project director on The Bow project, the city’s tallest building.

He has been with Ledcor for eight years, but has worked in the industry since the mid 1970s.