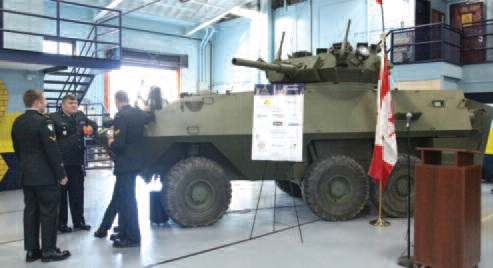 Construction work is starting on Ontario’s first LAV (Light Armoured Vehicle) monument in Durham, reflecting an initiative of community and military leaders to create a memorial for soldiers who served in Afghanistan.

The monument is being constructed adjacent to the “Highway of Heroes,” where fallen soldiers are repatriated to Canada through CFB Trenton, and then along Highway 401. “This is the result of a grassroots Durham region-wide community effort involving groups and individuals led by Erin O’Toole, the local MP and former minister of veterans affairs, who founded the Highway of Heroes Durham LAV Monument Committee earlier this year,” said program lead Tom Quigle.

He said the project is presently Ontario’s only LAV monument. Canada Company, a charitable, non-partisan organization that serves to build the bridge between business and community leaders and the Canadian military, is spearheading the program across Canada.

The monuments are “created from demilitarized and decommissioned LAVIII hulls, donated by the Government of Canada,” the program organizers say. However, community groups have to apply for local monuments and commit to the cost of replication and installation.

Clive Thurston, president of the Ontario General Contractors Association (OGCA) says he supports the initiative and is letting member firms know about it to provide support. The overall cost – even with land donated by Clarington municipality – will likely be more than $120,000, Quigley said. At present, “St. Marys is donating the concrete and services valued at $13,070 and the Highway of Heroes Tribute Program is donating $6,000 in landscaping and trees. Halminen Homes has been selected as the project’s general contractor,” Quigley said.

“All the other materials are still available” should construction businesses and suppliers wish to contribute, said Quigley. These include things like signage, electrical connections and lighting, benches, flagpoles, and “fractured granite boulders.”

Ret. Gen. Rick Hillier gave an impassioned speech in Oshawa at a June launch and fundraiser event for the LAV monument.

Hillier said when he has spoken to the families of fallen troops they often were seeking the answer to three questions: Did anybody notice their loss; did they appreciate the magnitude of the loss; and would they remember? loudly and the presence of so many of you from the first responders and the paramedics and the firefighters and police officers to all of you from across the community, on the overpasses right here where the bodies of our soldiers travel down that Highway of Heroes answers yes to all three of those questions for our families.”

In an article in durhamregion.com, Hilliard was reported as thanking residents who lined 401 for repatriation ceremonies for 158 soldiers killed in Afghanistan and one killed in Iraq.

“It didn’t make their day one single little bit easier, did it?” he said. “They still had lost the person that they loved, but could you imagine how much more difficult those days would have been if they thought the answer to those questions was no. Your presence on those overpasses was so powerful that it answered yes to those questions.”

Hillier said LAV has symbolic importance, because soldiers spent their days living in the vehicle, often sleeping and eating in it when they were deployed.

“The LAV is the fighting vehicle of the past generation that went to war. . .you put what is really the symbol of the soldier out for people to see,” he said.