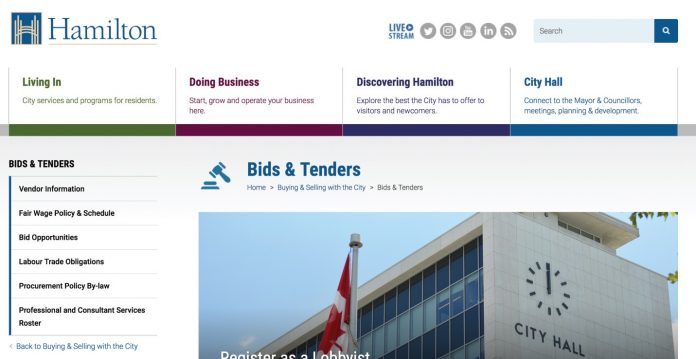 The City of Hamilton and several other public agencies in the Hamilton and Halton region have switched their procurement engine from Biddingo to the Bids&Tenders system provided by eSolutionsGroup Inc.

The change for Hamilton took place on Oct. 1.

City council approved the change in mid-2017 after reviewing options and evaluating five competing responses to a Request for Proposals from the city and surrounding communities.

The eSolutionsGroup proposal won the competition because of its features and lower costs, both to the public agencies and surrounding agencies, as well as prospective bidders.

All of the competing systems require bidders to cover the costs of submitting their bids, but the Bids&Tenders system proved to be the least expensive, and in fact, according to city staff, was less costly than Biddingo.com. Bidders can either sign up for an annual service at $165 per year (where they can access all available options from different purchasers) or pay a $45 one-time fee. Biddingo.com charged $250 per year. City staff determined that 84 per cent of vendors using Biddingo.com were also registered with eSolutions, meaning they would have no trouble migrating to the new system (and might save additional money as a result).

The city also saves money on the back-end, because of its built in contract management system, saving an estimated $9,605 in hard costs. “With the efficiency of this system and as staff learn to use the system to its fullest, staff also expect to achieve some time savings in reporting in the maintenance of contracts,” said the memo written by Rick Male, Hamilton’s director, financial services, taxation, and the city’s corporate controller.

The system also includes resources to manage the city’s Vendor Performance Management (VPM) processes, allowing procurement staff “to set up an automated process to capture the required vendor performance evaluation forms, as well as any vendor performance incident forms issued through the term of the contract,” Male wrote.