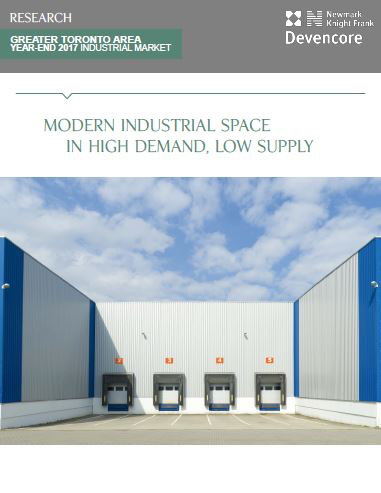 Newmark Knight Frank (NKF) Devencore has reported that the overall availability rate for industrial space in the Greater Toronto Area (GTA) reached a historic low of 2.7% at the end of the third quarter of 2017, down from 3.4% a year earlier.

Much of the demand is being driven by the warehousing and e-commerce sectors; the demand is so strong that some build-out suppliers report being booked well into 2021. Additionally, average asking gross rents continue to trend upwards as the availability rate shrinks. In the GTA as a whole, asking gross rents are currently $10.64 sq. ft., up from $10.30 sq. ft. in the prior quarter.

“Large industrial spaces with modern amenities and features, including clear heights of at least 32 and the ability to handle 53-foot trailers are in extremely short supply,” said Sean Fiset, vice-president at NKF Devencore’s Toronto West office. “In Mississauga and Brampton, which have the advantage of ready access to major transportation routes, this shortage is felt most strongly.”

“It is also important to point out that, by these criteria for modern industrial space, as much as one-third of the available industrial inventory in the GTA is functionally obsolete and suitable for only smaller operations,” Fiset said.

“Approximately three million sq. ft. of new space is scheduled to be delivered to the GTA industrial market over the next 12 months, but this will not address all of the pent-up demand,” said Rob Renaud, managing principal/Broker of Record at NKF Devencore’s Toronto West Office.

The NKF Devencore report also notes that easy access to the GTA’s major transportation arteries–especially the 400-series highway network–continues to be an important consideration for tenants, and finding suitable land that addresses this need is increasingly difficult. As a result, redevelopment of existing structures in Mississauga and Brampton to meet the requirements of the large warehousing and distribution concerns may increase in the coming years.