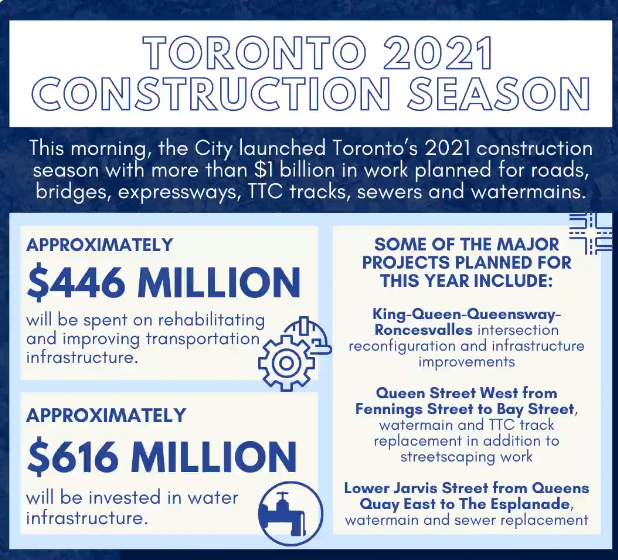 Toronto’s 2021 construction season was launched on March 29, with more than $1 billion in work planned for roads, bridges, expressways, TTC tracks, sewers and watermains.

Approximately $446 million will be spent on rehabilitating and improving transportation infrastructure including:

As well, approximately $616 million will spent on water infrastructure including:

Last year, the city completed $1.080 billion in construction related to water and transportation infrastructure. City-led construction is considered an essential service by the Province of Ontario and is necessary municipal work to ensure Toronto’s infrastructure remains safe, in a state of good repair and able to meet Toronto’s needs now and in the future.

“Municipal construction and the work we’re doing to improve our infrastructure will help fuel our recovery from the COVID-19 pandemic and keep the foundations of this city in a state of good repair, especially when the economy begins to open,” said Mayor John Tory.

“As we continue the vaccine rollout in Toronto, the need to renew the City’s aging water and transportation infrastructure, which millions of residents rely on every year, is stronger than ever. We need to ensure our roads, sidewalks, bridges, expressways, watermains, TTC tracks, storm and sanitary sewers meet the needs of increased activity and can keep up with the city’s growth now and in the future.”

Major projects planned for 2021 include:

The City takes an active approach to coordinating construction to reduce prolonged disruption to local residents and the travelling public. Where possible, staff consider all the potential construction needs of a particular area and liaise with outside agencies such as the TTC, Toronto Hydro and utility companies to coordinate their construction needs and plan how to complete the work together in stages or at the same time.

The annual weekend maintenance closure of the Gardiner Expressway is expected to take place from 11 p.m. on June 25 until 5 a.m. on June 28, closing the entire expressway from Highway 427 to the Don Valley Parkway.

The annual weekend maintenance closure of the Don Valley Parkway is expected to take place from 11 p.m. on August 6 until 5 a.m. August 9. In order to keep the rapidly growing cycling network safe, the City will undertake a new bikeway maintenance pilot this summer. Existing City crews will be deployed for frequent and dedicated inspection, maintenance and localized repairs on Toronto’s bike infrastructure.

“With fewer commuters travelling on our streets due to the pandemic, now is the perfect time for the City to accelerate needed road construction and repair,” said Councillor Jennifer McKelvie.

“I want to remind all road users travelling through construction zones to please obey signs and reduce speed limits for the safety of the travelling public and construction crews working on-site. to best navigate construction, please be patient and plan your travel in advance. These infrastructure projects will help keep Toronto working and support our economic recovery.”