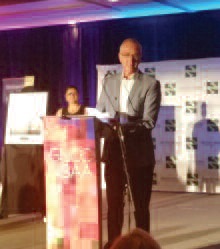 The Greater Niagara Chamber of Commerce (GNCC) has announced the winners in its annual Niagara Business Achievement Awards.

Among architectural, engineering and construction finalists, Kraun Electric won in the Excellence in Business – 51 employees or more – category.

Special awards were also announced in the Bestowed Award category, including to Phil Ritchie, president of Keefer Developments who has been named 2016 Builder of the Year.

Keefer’s website says the Niagara based real estate development company specializes in “heritage and brownfield revitalization projects” and that the company is “active in the revitalization of downtown Niagara Falls.”

The awards were handed out at a June 23 ceremony.

The White Oaks Conference Resort and Spa won the Business of the Year Award. Homes by Hendrix had been a finalist.