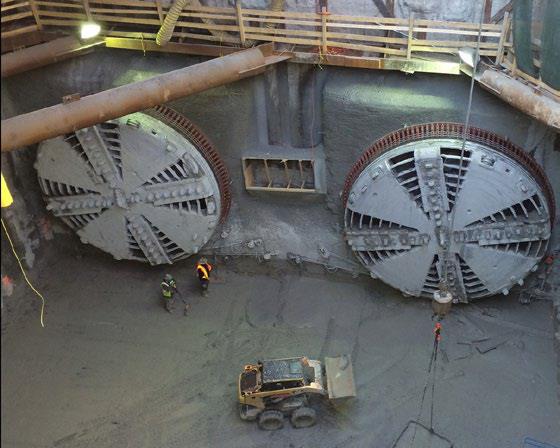 West End Connectors has been awarded the design and build contract for the Eglinton Crosstown West transit project, the minister of transportation announced Thursday.

“I want to once again congratulate the West End Connectors for being awarded the contract to design, build and finance the tunnel for the Eglinton Crosstown West Extension transit project,” Caroline Mulroney said at a news conference.

Back in March, Metrolinx and Infrastructure Ontario identified West End Connectors as the team they were negotiating with on the final aspects of a contract for designing, building and financing the tunnels for the project.

West End Connectors is a mix of international companies who have experience working on other major transit projects in Canada and around the world, including:

Tunnel boring machines will launch at the Renforth site and dig the underground section between Renforth Drive and Scarlett Road. To get the launch site ready for the arrival of the machines early next year, West End Connectors will carry out some utility works, conduct site surveys, and start setting up monitoring equipment for environmental testing. They’ll also be building an access road and mobilizing two rigs to start building the launch shaft.

Construction between Martin Grove Road and Scarlett Road is expected to start in spring 2022.

Mulroney called the announcement a milestone as the Ontario government and its key delivery partners, Infrastructure Ontario and Metrolinx, have awarded a contract value of $729.2 million to West End Connectors to design, build and finance the tunnels for the Eglinton Crosstown West Extension project.

Just last week, the federal government committed their 40 per cent share of Ontario’s priority subway projects, endorsing Premier Ford’s bold, visionary transit plan. With the Federal Government at the table with us, we are that much closer to getting shovels in the ground and delivering a modern, integrated transit network for people in the GTA.

The extension will create convenient connections between different transit systems throughout the region ― UP Express and Kitchener Line GO train service at Mount Dennis, TTC bus services at transit stops in Toronto and MiWay and GO bus services via the Mississauga Transitway at Renforth Drive. Through future phases of the project, the province is also committed to establishing connectivity to one of the region’s largest employment and economic hubs – Pearson International Airport.”