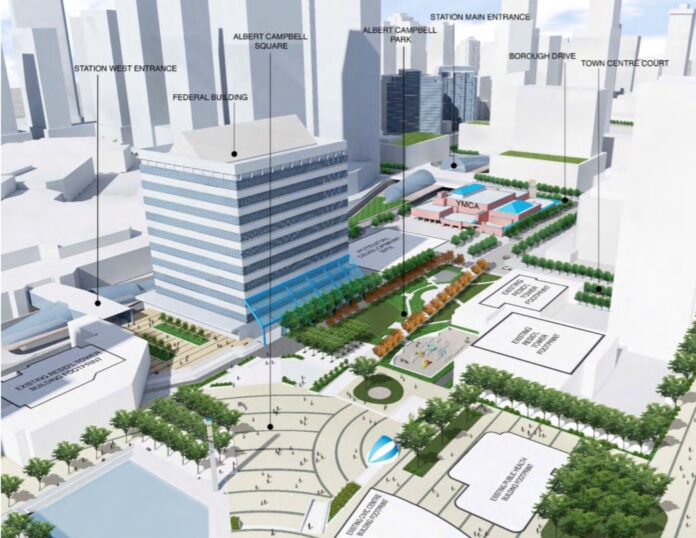 Here are the top five permits, listed in order of recorded value.

The One at 1 Bloor Street W. Is rising above the ground, even as controversy swirls in an ownership dispute.

The Globe and Mail recently reported that “the partnership behind the tallest and most ambitious luxury condominium development in Canadian history has disintegrated, sparking a court fight and raising doubts about the future of the project.”

Road-paving magnate Jenny Coco has asked the courts to appoint a special investigator to probe the affairs of the company jointly owned with developer Sam Mizrahi.

“In a recent court application, the Coco family alleges that after years of discord between Mr. Mizrahi and Ms. Coco, Mr. Mizrahi agreed to buy out their interest in the project by Aug. 30,” the published report says. “The Cocos allege they are owed roughly $100-million, which was injected as debt and equity.”

Mizrahi has failed to secure financing, the Cocos assert. “The buyout is not happening. Sam’s financing has fallen through and he cannot close,” the application alleges.

Scott Hutchison, a lawyer for Mizrahi, said in a statement to the newspaper that his client will be responding to the Cocos’ application. “Mr. Mizrahi respectfully disagrees with the assertions in the Notice of Application filed on behalf of Ms. Coco. He has consistently acted lawfully and in the best interest of the project and all its stakeholders,” Mr. Hutchison said.

The One has other challenges, including the decision by Apple to apply to the courts to have its ground-floor lease terminated because of repeated construction delays.

“The luxury development has also been dragged into the Bridging Finance scandal that has rocked Bay Street, after allegations from one of the project’s lenders that Bridging investor funds were used to backstop its loan,” the newspaper reported.

Despite these issues, the 85-storey project has started rising above the ground, with Urban Toronto’s forum showing several images of the rapidly-rising structure. Architects are Foster + Partners with Core Architects.

The building permit documentation says the site at 571 Bloor St. W. Is for a mixed-use residential with non-residential uses. The documentation indicates the permit was originally requested in 2017. The address is associated with a WeWork office sharing location.

The permit issued on Aug. 30 is for a mixed-use residential with non-residential structure in the Distillery District. Notably, city officials issued a stop-work order at the site in June because, according to an Order to Comply, there was “Construction/demolition work underway without issuance of a building permit.”

See all the August permits issued and applications received.