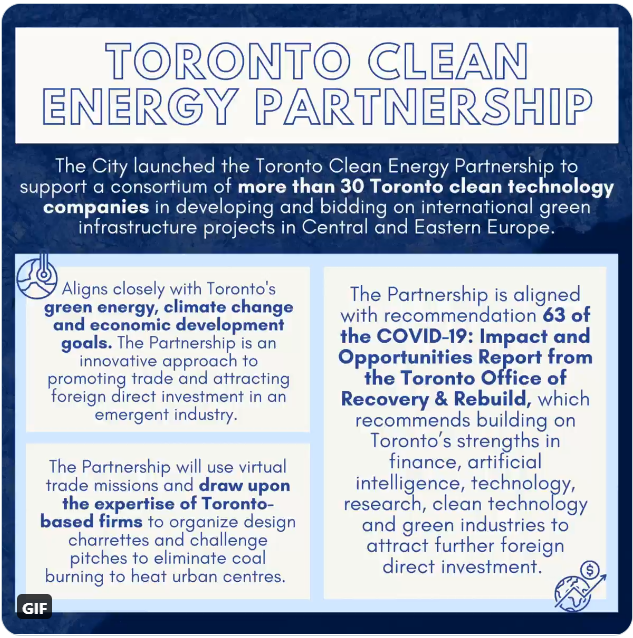 The City of Toronto has launched the Toronto Clean Energy Partnership that it says will support a consortium of more than 30 Toronto clean technology companies in developing and bidding on international green infrastructure projects in Central and Eastern Europe.

“In addition to supporting an emerging industry, creating jobs and stimulating Toronto’s economic recovery, the Toronto Clean Energy Partnership demonstrates our commitment as a member of the C40 to be global climate leaders and will inspire others to act to reduce greenhouse gas emissions,” said Mayor John Tory.

In addition to aligning closely with Toronto’s green energy, climate change and economic development goals, the partnership is being called an innovative approach to promoting trade and attracting foreign direct investment in an emergent industry. It will use virtual trade missions and draw upon the expertise of Toronto-based firms to organize design charrettes and challenge pitches to eliminate coal burning to heat urban centres.

The initiative is a result of Tory’s European Trade Mission in 2019. As a result of that mission, the City supported a consortium of 34 local green sector organizations to submit a bid to the City of Helsinki to eliminate its reliance on coal for heating. That process produced a cohesive partnership and a strong interest in continuing to work together to explore other clean technology opportunities internationally. The Canadian Trade Commissioners in seven Central and Eastern European countries have identified potential opportunities to develop and implement large green infrastructure projects using a similar approach.

The Partnership is also aligned with recommendation 63 of the COVID-19: Impact and Opportunities Report from the Toronto Office of Recovery & Rebuild, which recommends building on Toronto’s strengths in finance, artificial intelligence, technology, research, clean technology and green industries to attract further foreign direct investment.

“Toronto’s diverse economy, with its powerful combination of an established, world class financial sector and emerging green industries, will accelerate our recovery from the COVID-19 pandemic while leading the way toward a green global recovery,” said Deputy Mayor Michael Thompson.