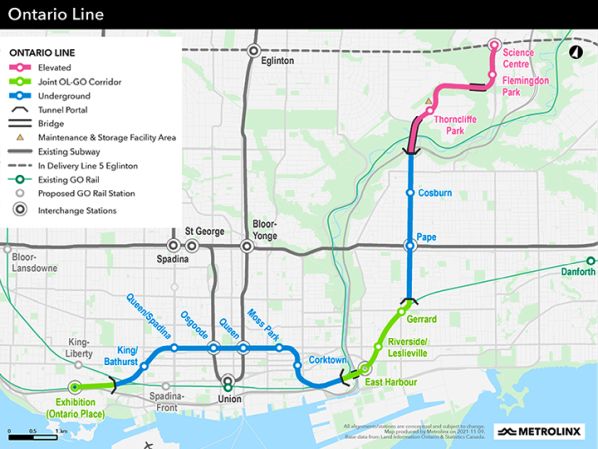 Infrastructure Ontario and Metrolinx have announced the preferred proponent teams for two major contracts relating to the GTA subway projects.

The Ontario Transit Group was awarded a design-build-finance contract for the southern section of Toronto’s Ontario Line running from Exhibition/Ontario Place to the Don Yard portal, west of the Don River.

Ontario Transit Group will be responsible for excavating the 6 kilometres of tunnels and constructing a station that will integrate with the existing Go Transit Exhibition station, two underground stations to integrate with the Osgoode and Queen TTC stations and four new stations at King and Bathurst, Queen and Spadina, Moss Park and Corktown. The group will also oversee groundworks to build tunnels and stations.

Infrastructure Ontario and Metrolinx said both teams ranked first in the evaluation of their respective RFPs delivered in June 2022. Negotiations are continuing to finalise the contract ahead of awarding the contracts by the end of the year.

Procurement for the North civil major works, as well as enabling works for bridge, track and other preparatory activities have not been announced.

The Ontario Line is one of four shovel-ready public transport projects in the Greater Toronto Area in which the federal and Ontario governments and the City of Toronto have agreed to provide over $26.8 billion.

Construction on the new Exhibition station started earlier this year, marking the overall start of construction on the Ontario Line, which will include 15 stations and will run from Exhibition Place in the west through the city centre to Ontario Science Centre in the northeast. There will be 3.7km of dedicated track in existing rail corridors, 3.1 kilometres of elevated track and 8.8 kilometers underground.