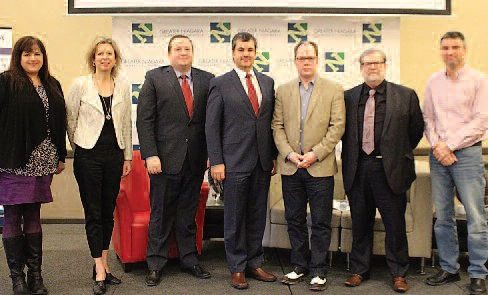 What are the best ways to improve procurement for public sector projects in the Niagara region?

Speakers at a February roundtable co-sponsored by the Niagara Construction Association (NCA) and the Greater Niagara Chamber of Commerce discussed challenging issues including bundling, the P3 model, and what construction lawyer Glen Ackerley has called the “hollowing out” of the local construction industry with large mega projects.

NCA president Kevin Brown says the event attracted about 80 visitors and while the theme of the program covered all aspects of public sector procurement, most of the audience were contractors, subtrades and others connected with the construction industry – many of whom have expressed concerns about trends that make it harder for smaller local businesses to win public sector opportunities.

“The event was a success,” Brown said. “We were able to have open dialogue about the issues. We all need to work together and make the region a great place to work and live.”

During the discussion, Ackerly, a construction lawyer, said many U.S. states have laws that stop state and federal construction projects from being bundled together into mega contracts.

These concerns are “for the very reason that it keeps small and medium sized firms out of the market,” he said. “It hollows out the industry. All you are left with are the big players.”

These issues are aggravated and enhanced by the trend towards P3 projects, where consortia must not only bid the work – they need to be able to raise the financial capital. This type of bidding requires much more planning and much deeper financial resources than most smaller or medium size contractors can handle.

Brown says to his knowledge there has been only limited P3 work in the Niagara region – the new Niagara Health System Complex was completed in 2012 with this model – but there were challenges when Niagara College set thresholds on prequalifications that initially excluded local contractors from bidding opportunities. (The college solved the controversy by expanding its prequalification list.)

Future projects that may use the P3 system may include the redevelopment of three of its long-term care homes and new social housing projects.

Ackerley said local governments and public agencies should explore ways to break down large scale projects into smaller components. A new hospital can cost upwards of $1 billion – and this scale is simply too great for most local contractors.

Jason Burgess, Niagara region’s director of procurement and strategic acquisitions, says the P3 model attracts bids by consortiums of companies with expertise in certain fields that come together. But he said local companies can become part of these organizations – the rules don’t “mean that the local player can’t participate.”

Burgess said the region created his job in part to invest more time into procurement, while being fair and transparent in areas such as how criteria are used to short list potential project general contractors.

Kevin Brown said he asked Burgess about plans for long term care residences in St. Catharines, and learned that the region is considering the P3 model to procure these projects. “They are certainly exploring that delivery option,” he said. “I don’t think it is a foregone conclusion that it would be the option they implement.”

Tony Dreesen, president of the Ontario Association of Architects (OAA) said local governments need to move away from focusing on selecting the lowest bid on projects, because bargain prices often mean lower quality work and materials.

“If you are going to nickel and dime, you’re not going to get the service needed,” he said.