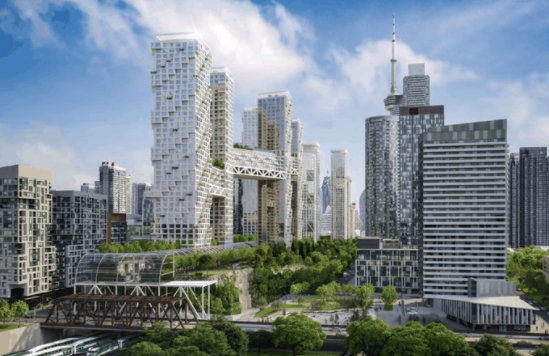 The Local Planning Appeal Tribunal (LPAT) ruled against the City of Toronto Wednesday in its dispute with CRAFT-Kingsmen Rail Corp., a group of developers who own the airspace above the Union Station Rail Corridor — between Spadina Ave. and Bathurst St.

In a ruling released Wednesday, LPAT said the City of Toronto was wrong to reject a proposal by Craft Acquisitions Corporation and PITS Developments Inc., to build a 6.5 hectare “mixed use community” of towers above the open rail space south of Front Street and between Bathurst Street and Blue Jays Way.

Council rejected a request from the developers who own the land in 2018 to amend the official plan and announced the plan to build the massive park, Rail Deck Park. While the city’s decision was originally upheld by LPAT, the ruling is now reversed and the Rail Deck Park is derailed.

“As noted, at the time of the city Mayor’s Aug. 3, 2016 announcement, the city did not own the CRAFT site,” the ruling stated, referring to Mayor John Tory’s announcement that the city planned to build the park.

“The city has also not taken any substantive steps over the last almost five years since then to negotiate the purchase of the CRAFT property or to commence expropriation proceedings to acquire it. Thus, little has happened since 2016.”

The developer’s plan, designed by the prominent Israeli-Canadian architect Moshe Safdie, includes six residential towers with 3,000 units and one office tower, along with a retail building and,along the southern half of the site, public open space on top of a deck structure and a parking garage.

Last year, the city amended its official plan to designate the area above the tracks as parks and open space, calling the CRAFT proposal “overdevelopment.”

At the end of a nine-week hearing, LPAT panel members disagreed, ruling that the CRAFT development plan conforms with Ontario and city policies, largely rejecting the city’s arguments.

In a statement following the LPAT ruling, Mayor John Tory said he believes “creating an iconic park in the heart of our city is the right thing to do.

“Although I respect the LPAT decision today, I am deeply disappointed by it and the possible impact on the future of Rail Deck Park,” Tory said. “This is a very difficult site to build a park on, let alone several high-rise towers.”

City staff will review the decision, Tory said, confirming his determination to address the shortage of parkland in the downtown area.

“I’ve talked to many people since we launched the idea of Rail Deck Park and asked them the simple question: Do you want more condo towers on land we could create over the rail corridor or do you want an iconic destination park?’ Most said they’d like to have a park,” Tory said.

“While that appears more difficult today, we remain committed to building up our city, improving the quality of life for everyone in our city including open space and parkland.”