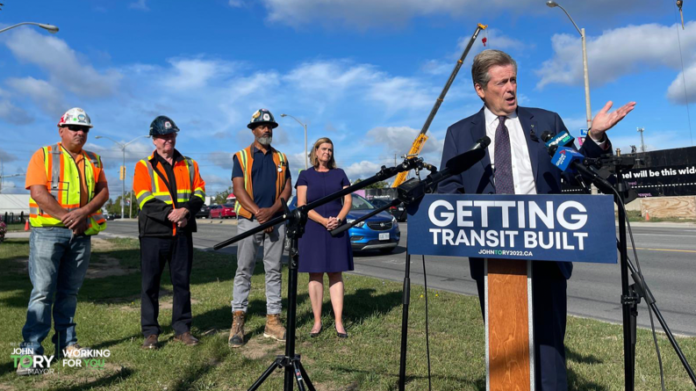 John Tory says he is committed to the city’s $28 billion transit plan if re-elected in the upcoming municipal election.

“Investment in transit infrastructure is crucial to our city’s success, health and vitality. To enable our city to grow and prosper sustainably, investment needs to happen,”said Mike Yorke, . “These projects will link thousands of housing units to mass transit , making our city far more accessible to far more people.”

The transit plan, which also includes the Yonge North Subway Extension, is also supported with funding commitments from the provincial and federal governments.

“A growing region requires reliable and resilient infrastructure that will continue to advance economic development, job creation and connectivity. With historic investments by all levels of government, we are building and expanding transformative transit infrastructure that will strengthen the future of the city, support prosperity and build vibrant, inclusive communities,” said Joseph Mancinelli, LiUNA International Vice President and Regional Manager of Central and Eastern Canada.

The new municipalcouncil will need to prioritize building the Eglinton East LRT — for which $1 billion has been allotted — as well as the Waterfront Transit Network Expansion, Tory said, including:

“Toronto is growing, and a big part of that growth requires continued investments in transit – from the city, from the province and from the Government of Canada,” Tory said in the news release. “This transit plan is a monumental gain for our city and the $28 billion transit expansion is on track, but it has to stay on track. That has been my focus as Mayor and will continue to be my priority if re-elected.”