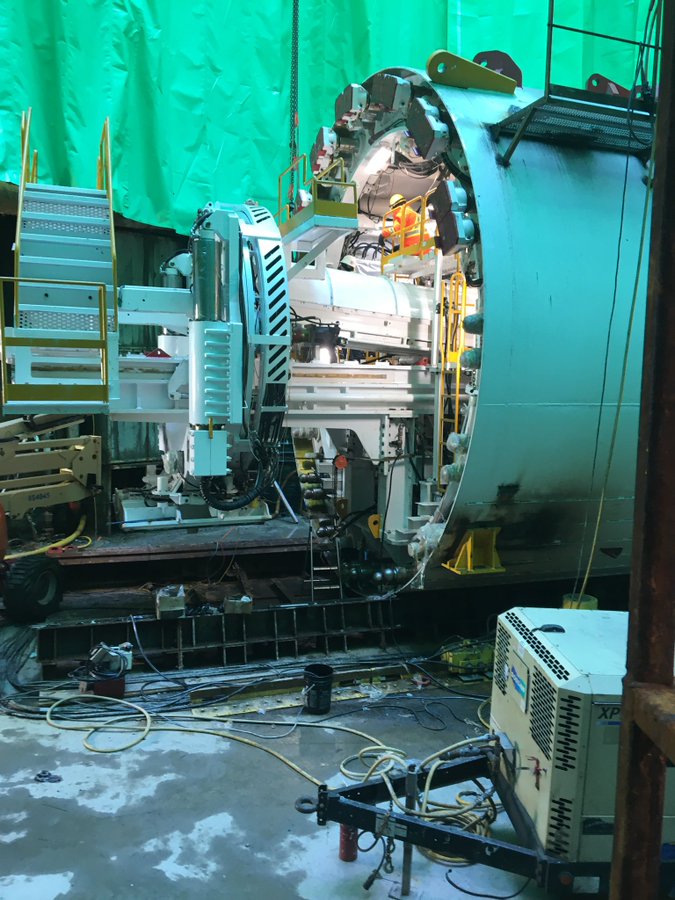 The cutter head is built of multiple bits designed to grind the bedrock 50 metres below ground and place rings of pre-cast concrete liners with a “vacuum articulated process.”

Donnie worked about 20 hours a day supervised by crews from North Tunnel Constructors ULC, breaking up 10.5 km of shale bedrock approximately 50-metres underground running alongside to the Don River.

The Coxwell Bypass Tunnel is part of the Don River & Central Waterfront project. It will capture, store and transport a mix of rainwater and sewage to Ashbridges Bay Treatment Plant. It’s the 1st of three phases for the 22 km DRCW tunnel system.

It’s Toronto’s largest and most significant stormwater management program in the city’s history.  The Coxwell Bypass Tunnel is the first project in the Wet Weather Flow Master Plan that will virtually eliminate the release of combined sewer overflows into Lake Ontario. The project consists of five work shafts, 12 drop shafts and 10.5 km of 6.3 m diameter tunnel. Secant piles were utilized as support of excavation for the work shafts while the drop shafts were drilled. The tunnel will be excavated in shale and lined with precast concrete segments.

The tunnel is the first of three phases of the 22-kilometre Don River and Central Waterfront Wet Weather Flow System, which will keep combined sewer overflows out of the city’s waterways.

Including the Coxwell tunnel, a new outfall, pumping system, disinfection treatment and Ashbridges Bay remediated land, the budget is more than $3 billion.