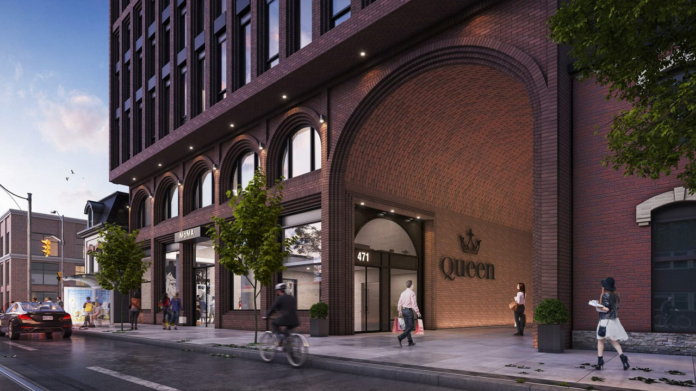 Developers have submitted a zoning bylaw amendment to build a 14-storey mixed-use condo in Etobicoke.

Property owner Format Queensway Limited Partnership says it wants to build a mid-rise structure at 75 The Queensway. KFA Architects and Planners are the designers.

DataBid.com, citing an Urban Toronto posting, reports that the property once housed a gas station and associated car wash. The proposed surrounding context includes a one-storey commercial building to the west, industrial uses to the south, and proposed developments of eight-storey and four-storey mixed use buildings currently in the works, for the north and east.

The building will have a five-storey street wall along The Queensway, with setbacks of three metres from the front lot line for floors 6-8, and an additional two metres at floor 9. The remainder of floors are setback an additional three metres from the floor below in order to fit within a 45-degree angular plane measured from 80 per cent of the planned width of the Queensway. The 14th level, the mechanical penthouse, features 161 sq. m.  of outdoor amenity area.

The cladding proposed will be brick and coloured metal paneling with punched windows for the majority of the facade and primarily glazing for the retail area and main residential lobby.