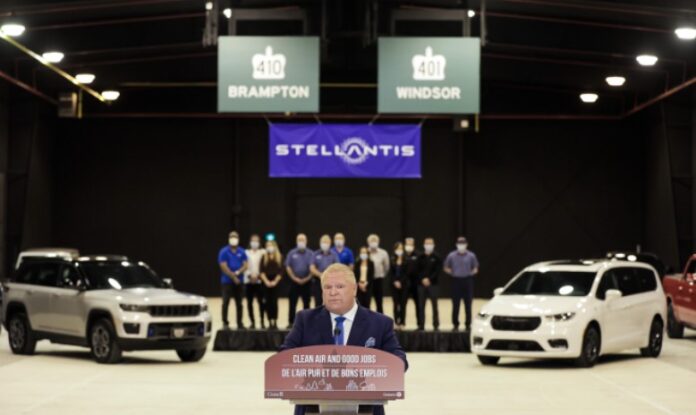 Stellantis has announced a $3.6-billion investment to upgrade the assembly lines at plants in Windsor and Brampton, to produce electric cars.

Canada is contributing $529 million, Ontario $513 million and the rest is coming from the company, part of a $45-billion global investment to transition to make electric cars and technology over the next three years.

The Canadian project will also create its first EV battery testing lab in North America and invest in an electric vehicle centre of excellence at an existing research and innovation centre in Windsor.

“We hope today’s announcement really helps bring assurance to our families, to our employees, and the local community that we are committed to Canada for the long run and for the next 100 years,” said Stellantis chief operating officer Mark Stewart.

It has been an electric spring for Canada’s automakers with more than $13 billion promised in just eight weeks to build the needed battery supply chains and shift production from combustion-engine to plug-in vehicles.

That is on top of another $3.5 billion promised in the last four years, including investments to make electric school and transit buses, produce and process critical minerals needed to make batteries, for research and development facilities to push electric vehicle innovation and for retooling assembly lines at major car plants including Stellantis, Ford, General Motors, Honda and Toyota.

“Now Canada will lead in the EV supply chain, both from the minds to the car to the recycling,” Innovation Minister François-Philippe Champagne said in an interview.

The string of big announcements includes $2 billion from General Motors to make its Oshawa plant EV-ready and start making fully electric delivery vans at its CAMI assembly line in Ingersoll. Another $1.4 billion over six years will make the Honda plant in Alliston, Ont., EV-ready.

“I think the first step is the investments,” Stewart said. “All of us as more traditional automakers, we’re making the convergence right and the transition to that.”

He said the decision on which electric vehicles will be made in Canada is not yet finalized.

That plan, part of a US$1-trillion infrastructure bill, died at least temporarily amid U.S. domestic political squabbling, and in its ashes carmakers and Canadian governments have been rolling out the dough to expand production here.

But Biden’s singular focus on making the U.S. auto sector entirely self-sufficient continues. On Monday, the White House unveiled plans for US$3.16 billion in seed money to foster partnerships with the private sector aimed at boosting American production of batteries and components for electric vehicles.

The money, which comes from what would have funded that infrastructure bill, aims to end U.S. “reliance on competing nations” — a reference to China, the world’s largest supplier of the critical minerals used to make EV batteries, but also evidence of the risk Canada faces in being caught up in the president’s Buy American zeal.

There are also two cathode active material plants being built in Bécancour, Que., and new investments to build zero-emission school busies and transit buses in Quebec.