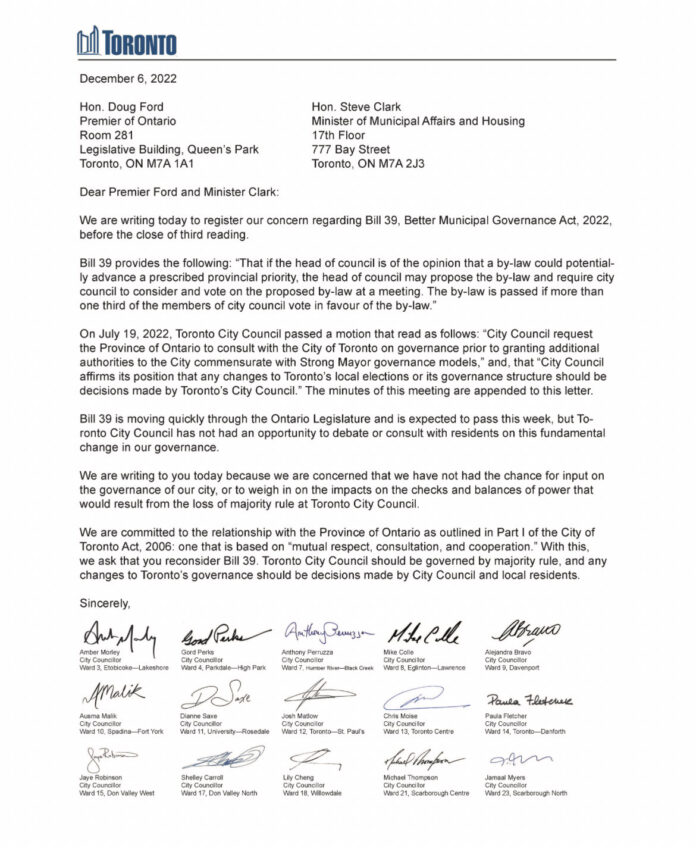 By The CANADIAN PRESS

Ontario has passed legislation that allows Toronto and Ottawa to enact certain bylaws even if a minority of councillors are in favour, capping off a whirlwind of widely criticized housing-related moves.

Their concern about Bill 39 or the Better Municipal Governance Act 2022 is about ending majority rule at city council and allowing Mayor John Tory to propose and amend bylaws deemed provincial priorities with support from about one third of council.

“We are writing you today because we are concerned that we have not had a chance for input on the governance of our city or to weigh in on the impacts on the checks and balances of power that would result from the loss of majority rule at Toronto City Council,” they wrote in the letter.

The latest bill allows the province to appoint the regional chairs in Niagara, Peel and York, and boosts so-called strong mayor powers that the government gave to Toronto and Ottawa earlier this year.

The first set of powers allowed the leaders to veto council decisions deemed to hamper the creation of new homes, prepare and table the city’s budget, as well as hiring and firing department heads, and the new powers allow them to propose housing-related bylaws and pass them with the support of one-third of councillors.

However, while Toronto Mayor John Tory has said he will use the powers in a limited and responsible way, Ottawa Mayor Mark Sutcliffe has said he is not interested in using them.

The legislation follows another housing law that angered municipalities because it cuts fees developers pay that they use to build infrastructure for new homes and upset environmentalists who say it weakens the role of conservation authorities.

As well, the government has proposed to remove land from 15 different areas of the protected Greenbelt so that 50,000 homes can be built, while adding acres elsewhere.