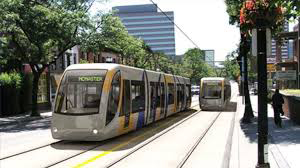 Just one day before Prime Minister Just Trudeau announced billions of dollars for transit projects, Ontario said it needs the federal government to commit $1.5 billion to build a light-rail transit line in Hamilton.

It has been more than a year since the project was cancelled due to the $5.5 billion projected cost.

Transportation Minister Caroline Mulroney says the province remains committed to providing $1 billion in capital funding, but a technical review says that is not enough to cover the cost of a “viable” LRT line, calling it a “fifth-priority transit project.”

The cancellation of the 14-stop Hamilton LRT project in December 2019 sparked outrage in the city, with local officials calling it a betrayal that would hurt both the municipal and provincial economy.

On Tuesday, Mulroney said it will take all levels of government to build the line.

“Everyone is going to need to pitch in,” she said in a statement.

NDP Leader Andrea Horwath, who represents a Hamilton riding, said the LRT is a priority project, but it needs to move ahead with or without federal funding.

“Making its future contingent on federal funding is not good enough,” she said.

New LiUNA Local 183 headquarters to be built in Vaughan