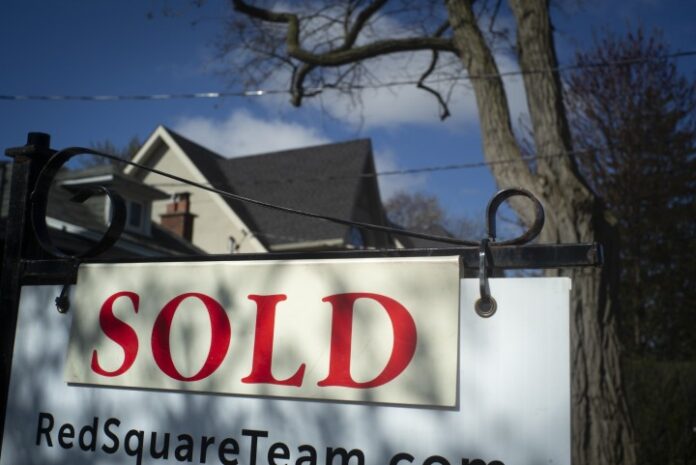 Toronto’s housing market soared to new heights in February even as the average home price surpassed $1 million for the first time and the recent buying frenzy intensified.

The Toronto Regional Real Estate Board said Wednesday there were more than 10,000 home sales for the month, a 52.5-per-cent jump from February 2020.

Realtors and the board say surpassing that expectation so soon indicates how undeterred buyers and sellers have been by the COVID-19 pandemic and is a sign of how heated conditions have become.

“When I get a call from a friend or brand new buyer just about to step into the waters, I say ‘Warning: it’s not for the faint of heart,’” said Terry Parkinson, an agent with Royal LePage Signature Realty in Toronto.

“No one seems to be worrying about the details. They’re just going in and buying and bidding and losing their head.”

Parkinson said she knew of a property described as a “total dump” in south Ajax, listed at $550,000 but sold for more than $751,000. She recently listed an entry-level home that was “a complete fixer-upper” on the low side; it received 17 offers.

While she pushes her clients to make offers conditional on a home inspection and bank approvals, Parkinson said buyers insisting on these measures are being pushed to the bottom of the bid pile.

People are so eager to take advantage of low interest rates that they’re dropping their standards to make a quick sale, she said.

“There’s a sense of urgency that I don’t understand and that’s the part that scares because buyers think … ‘If I don’t get in now I won’t ever get in,’” Parkinson said.

Part of the market’s problems lie in the fact that sales are outpacing supply, even as more homes are put up for sale, Parkinson and TRREB said.

The number of new listings surged 44.6 per cent in February, but active listings were down one per cent to 8,727.

“It’s clear that the historic demand for housing experienced in the second half of last year has carried forward into the first quarter of this year with some similar themes, including the continued popularity of suburban low-rise properties,” TRREB president Lisa Patel said in a news release.

She warned that trouble was on Toronto’s horizon because of disparities between supply and demand that are already shifting conditions to favour sellers and challenging markets elsewhere — including Vancouver, previously the country’s hottest market .

“The supply of listings is not keeping up with demand, which could present an even larger problem once population growth picks up following widespread vaccinations later this year and into 2022,” she said.

Purchases were up across most housing types in February, but condominiums led the way. That category’s sales volume increased 64.3 per cent, but average prices dropped 3.7 per cent to $642,346.

Parkinson believes spring may bring more supply to the market, but she’s unsure how fast supply needs to increase before it starts to cool the market and prices.

“There will be a rainbow at the end of this, but I don’t know when.”