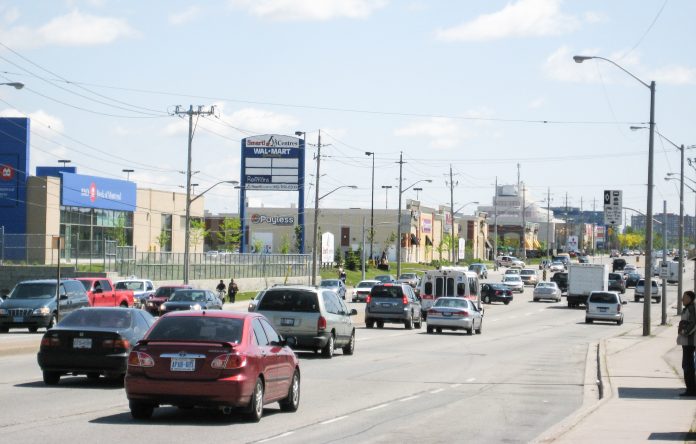 Nearly four years after the first development application was submitted proposing its own vision the redevelopment of Toronto’s Golden Mile, the final community consultation meeting on the Secondary Plan Study was held recently, with City Council approval expected later this year.

RioCan Holdings Inc. submitted their OPA Application Nov. 30, 2015 putting forth its own vision for a complete, mixed-use redevelopment of their Eglinton Avenue East site because “it was unclear when the city would complete its planning study for the Golden Mile”. In the meantime, the Eglinton Crosstown Light Rail Transit (LRT) continued to move towards its opening in 2020.

The Golden Mile is one of six major Focus Areas along the new 19 kilometre Eglinton Crosstown LRT where substantial change is expected. The Eglinton Crosstown rapid transit LRT is currently under construction and will become a key east-west corridor in Toronto running from Kennedy Road to Weston Road. It is intended to support residential, employment and retail growth.

The RioCan Management Inc. application builds on the six principles outlined in the City’s Eglinton Connects Planning Study finalized in 2014. It proposes a complete, mixed-use community with a new structured street grid on its 10.7 hectare site (26.5 acres) site at the east end of the Focus Area. Approximately 300,000 sq. m. (3.2M sq. ft.) is proposed to be developed including 3,000 residential units and 58,000 sq. m. non-residential. The redevelopment is expected to occur over time.

The Golden Mile is the largest of the six major Focus Areas along the Eglinton Crosstown LRT. In their Eglinton Connects Planning Study, the city describes the development opportunity as significant and “unparalleled elsewhere”. There will be five surface LRT stops in Golden Mile.

The Golden Mile is located in the former municipality of Scarborough in Toronto’s east end running along Eglinton from Victoria Park Avenue to Birchmount Road. Originally the site of a munitions factory for the war effort due to its proximity away from the city, in the 1950’s it was redesigned as one of Canada’s first model industrial parks. Today Toronto’s Golden Mile of industry is predominantly a car-oriented commercial and business corridor.

There are six development applications currently under review or pending for the Golden Mile, proposing nearly one million square metres of gross floor area, including over 12,500 residential units.

Among the applications is one by Choice Properties REIT which proposes to redevelop its 7.7 hectare site (19 acres) at the corner of Victoria Park and Eglinton as a gateway to the Golden Mile with an expanded road network, new mixed-use and commercial/retail buildings and replacement of the current No Frills grocery store with a new grocery store.

In April this year Toronto City Council passed the Don Mills Crossing Secondary Plan for the Focus Area at Don Mills and Eglinton. The driving development proposal by Diamond Corporation for their Celestica site was approved by Council last summer, with Local Planning Appeal Tribunal sign off in January 2019.