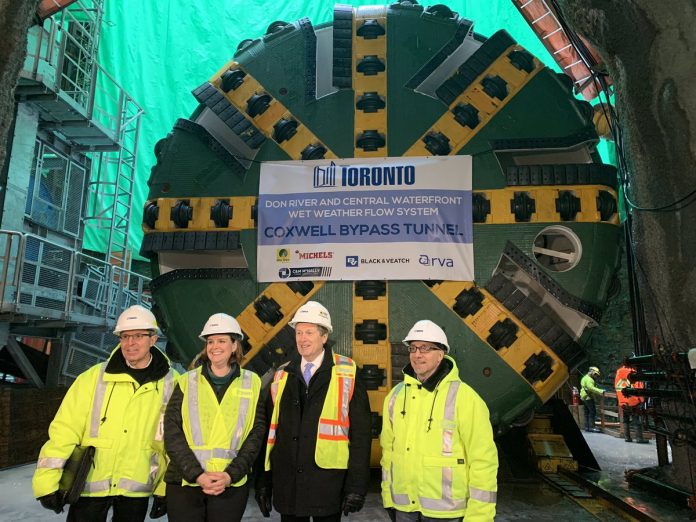 The City of Toronto launched a $3 billion storm water management program on Saturday, the first phase of the Don River and Central Waterfront and Connected Project.

It’s the largest and most significant stormwater management program in the city’s history and is expected to greatly improve water quality in the Lower Don River, Taylor-Massey Creek and along the city’s Inner Harbour with upgraded technology and capacity to capture, transport and treat sewer overflow.

The Coxwell Bypass Tunnel launched in December is a 10.5-kilometre long, 6.3-metre wide tunnel built at a cost of $400 million and will run west along the Lakeshore Boulevard, east to the Don Roadway, north up the Don River Valley to the North Toronto Treatment Plant and east to the Coxwell Ravine Park where it ends.

It will be dug by a 115-metre machine that weighs close to a thousand tonnes.

The machine can dig at least 20 metres of tunnel per day, and the entire Coxwell Bypass Tunnel project is anticipated to be completed in 2024.

Mayor John Tory was at the Coxwell Bypass Tunnel launch in December. He explained how large volumes of rain put the wastewater system into overdrive to prevent major flooding, by pushing wastewater overflows into the rivers and into Lake Ontario when it reaches a certain threshold.

Tory said the city was faced with the “difficult and unacceptable choice” of excess wastewater rushing back up through the sewer system and into people’s homes or allowing it to go into in Lake Ontario.

“Both of those alternatives are obviously unacceptable, but the choice was made to have the tainted water go into the lake,” he said.

Plans put in place by councils over the years said that it would take until 2038, for the city to stop dumping wastewater in the lake.

“I just felt that was far too long,” Tory said, adding his goal is 10 years.

The complete Don River and Central Waterfront Tunnel System will include a 22-kilometre tunnel system consisting of three integrated tunnels, 12 wet weather flow storage shafts along the tunnels, 12 connection points to the tunnels for storm water and combined sewer overflows, seven offline storage tanks and the technology necessary to regulate the flows inside the city’s sewer system.